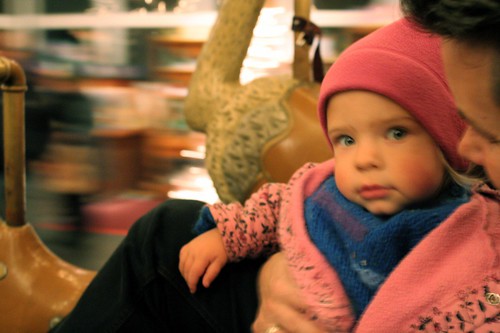 The other night we went to the Tilden Park carousel. Every year they doll it up, along with: the building it’s in, the roof on top of the building, the lawn in front, and an enormous, hundred-foot conifer. Lights, lights, lights, everywhere. Santas, snowmen, snowwomen, elves, reindeer, candy canes, and more, illuminated to the point of a major strain on the Northern California power grid. Hot cider is added to the menu at the concession stand.

On the night we were there, Santa his own bad self sat in a nicely decorated little hut, ready to have kids parked on his lap, hoping I’m sure that fewer than 30% would break out crying. Being a sentimental type, the idea of kids crying on Santa’s lap isn’t entertaining to me, but those with a different sense of humor may actually appreciate this feature on The Poop, San Francisco Chronicle’s parenting blog: crying Santa photos.

But back to the heartwarming holiday scene. We had gone to the extravaganza of lights following the purchase of our first family Christmas tree. The fact that it was our first tree is surprising, since the beloved and I have been together for over a dozen years, and cohabitated (true to lesbian form) for most of them. (Q: What does a lesbian wear on the second date? A: A moving truck. Okay I’m sure I got that wrong; I never can remember scripted jokes. Maybe it was “What accessory does a lesbian bring on a second date?” But you get the idea.)

All the previously shared holidays had been large multi-family gatherings held up in some cabin in the mountains, so we hadn’t the occasion to set up our own individual home. This year, though, we have a baby in the hopper, and by the way he’s squirming around in there he may not wait ’til 2007 to come out. No way were we going to be up in the hills, far from our Walking Goddess midwife when the water broke. By all indications (meaning, the last birth) this guy is going to shoot out of the womb with the velocity of a human cannonball at the circus.

Transferring the nexus of holiday celebrations is a huge thing, I suspect, in most families. At some point, the epicenter shifts from one generation to the next, and the transition is bittersweet. So is change. So is the warmth of gathering with beloved family members when you know there’s an empty place-setting at the table, and it’s not just for Elijah.

We were on the carousel, all four of us (three of us on the outside, the next little one kicking around inside his mum), and our little monkey was marveling at the festival of lights whirling past her. Just past the carousel I saw a boy, from behind, a Santa hat pulled low on his head. He was just the height and build that my nephew would have been, were he still alive, and the sight of this shape from behind took my breath away. This boy was with his mom and sisters, playing and romping. I could make him out just in a blur, each time we went by. The last time we passed him he had turned a little, and I thought I made out the eyebrow hair loss so tell-tale of chemotherapy. Or it could be my eyes were playing tricks on me.

By the next turn of the carousel, they were gone.

[Want the rest of the lyrics to Joni Mitchell’s Circle Game? Here.]