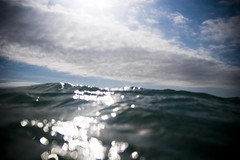 Last year on August 29, just as Hurricane Katrina was making landfall along the Gulf Coast, my old friend Susanne called me from Jackson, Mississippi. She was half in shock, but methodically calling every friend who would have been worrying about her, her partner David, and their daughter Uma Rae. Just a few days earlier they had boarded up their home in New Orleans’ Bywater district, gathered together their most precious possessions into their small car, and driven nearly 200 miles north to Davidâ€™s step-motherâ€™s home, to ride out the storm. (David tells their story on his website, here.)

Between sobs, Susanne told me that they only had room in the car for one cat carrier. Among a cascade of wrenching decisions was this one: which of their two cats was most likely to make it through the storm, andâ€”if the house was still standingâ€”the solitude following the storm, until they could return. They decided it would be Emmaâ€”my old kitty, whom theyâ€™d adopted nearly five years earlier, when our housing changed and we could no longer keep her. Theyâ€™d wanted to give their kitty a companion after the birth of their daughter.

I remember trying to send her compassion over the phone, trying to help her know that I was so grateful to know that they were safe, and that I trusted that Emma would be okay. They had left tons and tons of water out for her, and tons and tons of food. Of course I had no idea that sheâ€™d be okay, and neither did Susanne. But it was all too much; everything was too much. In the coming days, when the magnitude of the storm and its aftermath became more and more starkly evident, I watched in horror. I also worried about Emma.

As I watched and worried, I couldn’t help but think about the larger questions: Who survives? And why? They are questions I had often asked myself, since a trilogy of deaths surround and intensify my relationship to my daughter. First was my motherâ€™s death, a dozen years before my daughter was born. Next was the accidental death of a close friend and would-be lesbo co-mom, just six weeks after our daughter was born. What ended her life could just as easily happened to me, to any of us. Third was the cancer death of my nephew, just six months after my daughter’s birth. He was the first baby Iâ€™d diapered, the first infant Iâ€™d held, the closest thing to my own child Iâ€™d known, until my daughter came. My sister and her husband conceived him, quite intentionally, as a supreme gesture of healing and rebirth following the deaths of their mothers, each from cancer.

When Susanne called from Jackson, I was just beginning to tally my own workaday Post-Traumatic Stress Disorder, which had been quietly accumulating over the previous months since Erik’s death. I will never know the sense of devastation the people of the Gulf Coast felt during and after the hurricaneâ€”that is, unless and until the Big One comes (I live about a mile from a major earthquake faultline, and most of us seismically informed locals winced at images of Katrina’s destruction as an eerie forshadowing). But Iâ€™m fairly certain I will never, ever know the despair and abandonment and rage of those who could have been spared or saved, but werenâ€™t. The deaths of my mother, my friend, and my nephew, while each tragic, were not preventable but for an insidious, appalling, system-wide neglect of their race or class. Yet when Katrina hit, shock and despair were pungent to me still, and it was easy to (try to) imagine what it was like for an entire region to be simultaneously traumatized and grieving.

Some days after the storm, David and Susanne had been able to see, on a satellite image, that their block back home had remained dryâ€”even though they lived in the upper ninth ward, within a mile of the Industrial Canal levee breach. A week and a half after the storm, David was able to visit their house in the Bywaterâ€”and then, only because he is a photojournalist, and was able to wheedle himself through the blockades. With unspeakable devastation all around, and in the wake of the senseless, purposeless deaths of so many, David pried open the door to their home to find that Emma kitty had survived. This kitty, already five years longer-lived than my nephew, survived. At least 1,723 people did not.

Each death leaves its own bone-deep cavity; empty seats at the table, whether marked by a place setting or not. We do what we can to fill the gaps, some with words, some with silence, some with action. Most, whenever we can summon it, with love.

Who says irony is dead?