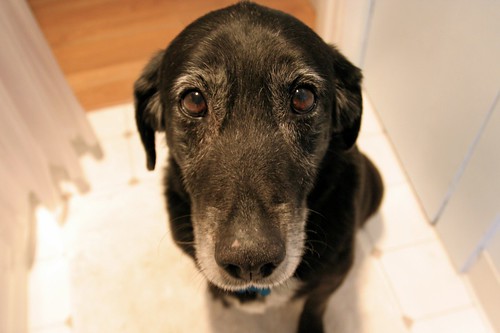 Each day, by the brevity of its life, our pet tells us, I shall soon be dead. In the deepest sense, these familiar creatures are part of the hurt of living. Because dogs inflict the suffering of loss upon us, the French sometimes call them “beasts of sorrow,”bÃªtes de chagrin.

–from Roger Grenier, The Difficulty of Being a Dog

Since around the beginning of the beloved’s last trimester with our lil’ peanut, I have known that my dog has had a heart condition. A terminal, shorten her life to sometime far less than a year heart condition.

She has a leaky valve, which means her heart can’t pump efficiently enough. To compensate, it gets bigger and bigger and bigger, and eventually it will crowd out everything: lungs, other organs, itself. She will die of congestive heart failure, or need us to help her to die, soon. Just how soon is the only thing we don’t know.

It figures that the thing she’ll die from is a heart that’s too large.

I brought her into my life just over thirteen years ago, to stem the tide of loss. In late summer, I lost my then-sweetie (though it was just me who lost her; she found someone else). Then three short weeks later my mother died. We had sensed she was dying, but didn’t know why. In mid-August, just as she was slipping into a coma, a metastasis of her breast cancer was diagnosed. She died the first of September.

I reeled with shock that fall, but by the dead of winter — and at the time, I was living in Minnesota, so it was the dead of winter — I knew I had to get me a dog. I would get me some warm-blooded mammal who was not going to leave me for a long while — not if I could help it. I would get me a little somebody I could care for, a little somebody who could see me through to the other side of this loss, and then some.

I went to a nearby shelter, and brought a friend with me so that I wouldn’t go home with the first dog who batted her eyes at me. Within a few minutes I saw a sweet three-month old lab mix, and quite naturally I immediately tried to convince my friend that I was kidding about how I didn’t want her to let me leave the shelter with the first pup I saw. She held firm. I squatted down and whispered to Maxie that I’d be back, gave her a kiss on the top of her head, and the next day I was driving home with my slinky-black wet-nosed girlie.

That year after my mother died, I would come home from just a half a day in the world — a half day in which I sleepwalked through graduate seminars, or immitated a memory of myself teaching a class, one which I’d taught with a dear friend twice before, and which provided a lifeline to continuity and community. Without it, I would have never left the house. But after half a day away on campus, I was spent. I had run out of words, or the energy to speak them. I would make my way back to the house I was living in (Eleanor’s House of Butches, I fondly call it; I was by far the feyest of the bunch). There I would gather my tail-thumping puppy in my arms, plod upstairs, curl onto the bed, and hug her. And hug her. And wordlessly hug her.

She gladly went with me everywhere I could take her. To clinic defenses and sweatshop labor protests. To university buildings, smuggled under my heavy winter coat, for office hours. To Lesbian Avenger meetings. When the weather warmed up, she accompanied me to outdoor cafÃ©s. She was my companion through the time in my life when I was most profoundly alone, most accutely companion-less. Then one by one, she endured the gradual encroachment of others into our lives and into my heart: first, the beloved; then, for an intense time, another dog; then — body blow! — our first child. Now, another baby. She has received each of these interlopers with a poignant mixture of generosity and impotence. The plight of the dog. Or perhaps more specifically, the plight of the dear, sweet, submissive dog.

In her thirteen years she has seen me through more losses than I could have imagined when I first drove her home that chilly January. She has lived longer than my oldest nephew. Unthinkable.

Precisely one week after our lil’ peanut’s birth, after climbing the flight-and-a-half of stairs it takes to get to our place, she collapsed, and so announced the beginning of this last chapter. Since then I’ve accompanied her outside on her frequent trips to pee, and then carried her increasingly bony body back up those stairs. She’s beginning even to dread that gesture of tender accomodation nearly as much as she yearns to go outside. Nights, she paces restlessly. Her breathing is often labored; she eats like a bird. I can’t know what she is experiencing, but it’s clear that she’s uncomfortable much of the time. How uncomfortable? I look at her and say what my daughter so often says to me, when I ask her something she can’t answer. “You tell me.”

Then I look up and make eye contact with death, who’s been patiently sitting over there all along, thumbing through last week’s unread Sunday paper.

Music is to noise as knowledge is to information

A place at the table