Though he’s not yet proved to have traced a clear political motive for his actions, national debate is coalescing around the issue of eliminationist, inciteful rhetoric in American politics, and rightly so. Whether or not we can know that he listened to the vitriol and deliberately sought to take it to its logical, insane extreme, it is in the air everywhere, and that so many of us look straight to that issue tells us all something. Â Talking about the issue with reason and wisdom is a challenge, though, particularly when so much of the argument can be seen (or misunderstood) to be doubling back on itself. Â That is, in a cultural and media context where all debate is reduced to two equivalent positions, a clear-eyed, honest acknowledgment of the lop-sidedness of the rhetoric of violence can be — and has been — dismissed as merely yet more partisan invective. But it’s not.

Paul Krugman reminds us, inÂ “The Climate of Hate,” that we could see this cloud forming back in faces of the crowds at the McCain/Palin rallies in the summer of 2008. Peter Daou Â decries theÂ “bogus equivalency between right/left extremism.” David Badash was a bit less wordy, more graphic. Former Bush speechwriter David Frum steps forward (from an as-yet quiet orÂ anonymous right) to exhort,Â “Can We Tone Down the Political Rhetoric?”saying “this [violent] talk did not cause this crime. But this crime should summon us to some reflection on this talk.”

Back in front of that Tucson Safeway, people did amazing things. A 61 year-old woman wrestled the gunman’s next load of ammunition from him, enabling two other men to take his gun. The heroism of the intern who clearly ensured that Congresswoman Giffords stayed alive until paramedics arrived made for an especially bright spot. Brighter still, given that he is an articulate, level-headed, exceedingly modestÂ gay Latino college student, in a state which recently codified, in SB 1070, the police’s rights to stop and search him based on “reasonable suspicion” of his immigrant status, and in whichÂ gay marriage is officially banned. (Added: here’s a great piece by Salon’s Mary Elizabeth Williams on why his ethnicity and sexual orientation matter.) In another bright note, Pima County Sherrif Dupnik (Tucson’s county), whoÂ spoke so directly of “political vitriol” in his briefing about the shooting, would not have been the one to have pulled Mr. Hernandez over,Â since he went on record for refusing to enforce SB 1070 when it became law last April. 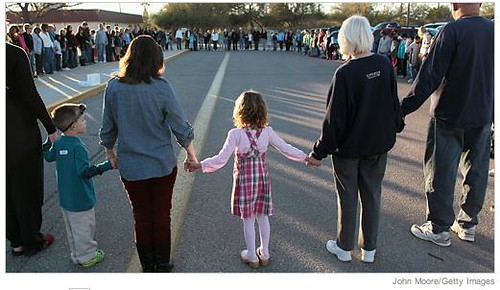 What weighs most heavily for me, though, and probably most of us who are parents of still-young children, has been the death ofÂ 9 year-old Christina Green, a baseball-playing, civics-loving third grader born on September 11, 2001. I’m aware that children are victims of violence worldwide, and in America, the rate of firearm deaths in children under 15 is a staggeringÂ 12 times higher than in the next 25 industrialized nations combined. But this is one child whose face and name I now know, and she was attending an event the likes of which I very well could have taken my own children to. Â I reflect on the several deaths of loved ones I’ve known in recent years — none involving gun violence, I hastily note, but one sudden and violent, another of a child just that age — and piece together just tiny shards of what her family might be feeling (might!), and it’s just impossible. As so many of us, I look at my children and imagine, and then quickly can’t imagine. It’s officially unimaginable.

I have not said a thing about Tucson to my 6 year-old daughter, and don’t plan to, unless she hears something at school. What to say? Liz Gumbiner asks,Â “How to talk to your kids about tragedy. Answer: No freaking clue.”(Closest I can get to a freaking clue isÂ this tip sheet from the National Association of School Psychologists.) For a middle class family like ours, no one serving in the military or working in the police force, in a decent neighborhood in a reasonably but not ridiculously crime-ridden city, we don’t see much violent crime, nor do we expect our children will be victims of it. Like Christina Green’s family. Which of course is why it strikes home to those of us like the Greens. There but for the grace of god.

So all that’s left, in the wake of the unthinkable and inexplicable and after all the arguments have been argued — with conviction and civility — is to extend the grace of god, or whatever we might understand that to be, to one another. Many of us Buddhist folks practice Tonglen. My primary teacher, Pema ChÃ¶drÃ¶n,Â describes it this way:

We begin the practice by taking on the suffering of a person we know to be hurting and who we wish to help. For instance, if you know of a child who is being hurt, you breathe in the wish to take away all the pain and fear of that child. Then, as you breathe out, you send the child happiness, joy or whatever would relieve their pain. This is the core of the practice: breathing in other’s pain so they can be well and have more space to relax and open, and breathing out, sending them relaxation or whatever you feel would bring them relief and happiness.

I can’t do this for Christina Green, of course, but I can for her family. Also for the families of the other five victims. Also for the family of Congresswoman Giffords, still fighting for her life. Also — if I’m doing this right — for the deranged gunman, and his family. If he’s as unwell as he seems, he may not be suffering any remorse. But I imagine his mother is.

2 thoughts on “A string of thoughts after Tucson”