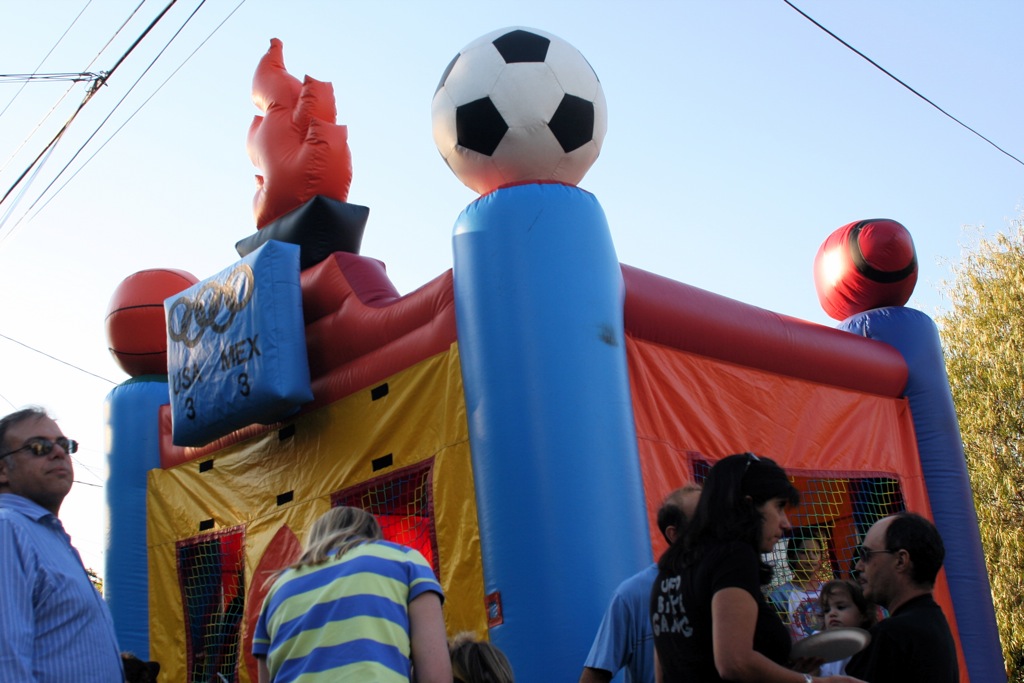 Many are familiar with the Syracuse Cultural Workers’ poster “How to Build Community.” [Scroll down a bit to see it; you can click a link to see it enlarged.] I’ve long harbored a scheme to get a bunch of their laminated posters and guerrilla-post them around my neighborhood. I’m just saving up for a bunch of them at $18 a whack.

Here are a few of their tips:

As it happens, this weekend some of our neighbors did just that: organized a block party. All of the above activities transpired in the street, which was a cinch to block off for the day. We’re all tempted to do it every single Saturday until we find out the city has a limit.

The biggest hit, for the 12-and-under set: the Jumpie Thingy. I’ve mostly seen them privately installed in back yards, though also in public parks for family reunions and the like. When they’re in a blocked-off street, they function as a neighborhood kid magnet, and the impact is blocks-wide. The Syracuse Cultural Workers might consider adding this to their list of community builders.

In other list news: To the long There Are Two Kinds of People… list should be added, Those Who Delight in the Jumpie Thingy, and Those Who Find it a Sweltering Bag of Chaos. Alas, while once I may have been in the former camp, I am now in the latter, and could only imagine our darling two-year-old suffering permanent damage from some limb akimbo.

Fortunately there was a big ole double-dutch game going on nearby, and I could cast my thoughts forward to a time when the lil’ monkey might engage herself that-a-way. Plenty of fun and excersize to be found betwixt those ropes. If you’ve forgotten, just check out Double Dutchess, the madcap SF-based jump rope crew (be boggled/inspired by this three minute video here). I might just take up a neighborhood collection and hire them for our next block party.

3 thoughts on “If you inflate it, they will come”