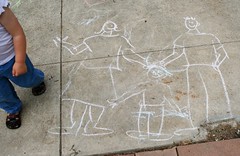 Of course this Sunday I would be slug enough not to have even unwrapped, much less read, the NY Times, a weekly luxury I refuse to give up, even when the monthly budget calls for cutting the tuna fish with cat food. For our consumption, I hastily note, not the cat’s.

Had I read it, I would have noticed this piece [requires freebie registration to read, drat ’em] by Anemona Hartocollis, on the anti- or a-gay marriage strain in LGBT community. I was alerted to its existence by Mombian’s exceedingly astute post in response to it. She includes Sarah Schulman’s statement from the piece, in which Schulman voices a concern that “lesbian mothers are embracing a ‘poverty model’ and taking themselves out of the running to be the next George Sand or Emma Goldman.” Mombian urges us to “stop the lesbian version of the Mommy Wars before it starts,” to which I say: Here here! I march behind you, Sister Rudolph, in the quest for some kind of lesbo common ground that’s high enough to avoid the skanky jetsam of what I thought was merely the (hetero) mommy wars.

Like Sister Rudolph, I too felt somehow personally isolated from the fray, once removed by lesbianism (as felt Rudolph), and then twice removed by being a Not-So-Mommy in the first place. But just as I was beginning to fancy that being a lesbian dad gave me a bit of immunity, I remembered that the whole lesbian dad thing is a figment of my own imagination, and to all the world — perhaps Sister Schulman, too — I appear to be a lesbian, gulp, mother. A mannish lesbian mother, certainly, but a mum nonetheless. Ostensibly, by dint of my parenthood, chucking aspirations toward literary or political greatness overboard as so much expendable ballast, distracted as I am by, say, wangling my little bairn into the right preschool. Well Pfft! I say. (Preschool, schmeeschool, ain’t she seen all the toddlers at anti-war demos? You can’t miss ’em! They’re the ones drawing the paparazzi like flies! But I digress.) When my own kin can be so blinkered about what lesbo parenthood must or can mean — and as an erstwhile Lesbian Avenger, I will always regard founding Avenger gal Sarah Schulman as kin — well. Up go the sleeves, and out comes the keyboard.

Indeed, one of the things Mombian’s Rudolph suggests is that the lesbian parent blogosphere, including locales such as this humble corner of it, can offer a corrective to Schulman’s grim assessment of the consequences or functions of lesbo parenthood, or what was easily construable as a grim take on it all (most grim, one imagines, when coupled with “married” partnership, the topic of the article). I am duly inspired to attempt a vigorous response, daunted only by the many avenues into the whole sticky wicket. In my first pass at all this I wound up splintering into at least a dozen different conversations, many of which I hope to take up in the future. Toward the front of the queue, for instance, is the left/queer critique of the gay “marriage” issue — the main topic of Hartocollis’ article.

Meanwhile I’ll try to offer up just a few thoughts in response to the gist of the article, dispersed in a two-part trickle, and prefaced by these few caveats:

Okay, so, caveats out, here are some thoughts. The first is essentially a wee reminder of our history: queer civil rights struggles have always entailed complex strains between radical and conformist camps. The Mattachine Society (arguably our nation’s first homophile organization) had a big ole blow-out in late 1953 over red-baiting, so consequential that a whole raft of members of the Northern California chapter resigned in protest, in effect, as historian John D’Emilio writes, “closing a chapter,” essentially the radical first chapter, of this organization’s history. Though he’s writing about Mattachine’s early history here (in Sexual Politics, Sexual Communities: The Making of a Homosexual Minority in the United States, 1940-1970, University of Chicago Press, 1983), his words apply across the decades, and bear extensive quotation:

In its first few years, the Mattachine Society had confronted issues that would surface again and again as areas of heated debate in the gay movement — whether homosexuality was an unimportant characteristic or an aspect of a person’s life so significant that it bound gay men and women together as a minority group; whether homosexuals and lesbians should accommodate themselves to the mores of society or assert their difference; whether they were victims of prejudiced opinion or of a system of oppression inherent in the structure of American Society; whether patient educational work or militant political action was the key to social change; and finally whether, in their quest for equality, gay people should rely on the leadership of professionals or their own independent efforts. The first round of conflict pitted “radicals” against “conservatives,” with the two camps standing on opposite sides of each question. But in later years the set of issues would prove capable of a variety of alignments.

Eerily descriptive, eh? Gay politics, fifty years ago. But you could take the critical issues facing queer people, decade by decade, and most would fit into this analysis. Whether we have chosen an issue, or whether it has chosen us, these dynamics shape our struggles. Parenthood, I suppose, shouldn’t be any different.

But what I wouldn’t have thought, before reading this statement by Sister Schulman, is that the act of becoming a parent and extending one’s family into a younger generation could be read as a regressive, private-sphere, conformist gesture, rather than one of the most widespread and consequential acts of civil disobedience in queer movement history. It’s one big fat kiss-in, people! Sure, you say, but visibility as a political objective is so 90s. To which I say, Granted! But we’re talking a whole new ballgame when the kiss is an anointing smooch on our cheeks by the next generation. Anointing what? Well, we’ll find out.

And when the cheeks being smooched are so many and varied — I mean, they’re bearded and clean-shaven, every color of the human melanin spectrum, they’re pierced and poofed with blush — we’re talking vast and widespread participation in this public act of private sphere expansion. In this domestic civil disobedience. I would venture to say — and I’m sure I’m not the only one to do so — that, whether you think it’s radical or conformist (and: surprise! I think it’s both!) the gayby boom is slowly but surely going to change the national climate in which queer politics takes place. On a scale, I might venture to say, not unlike that of the changes wrought by AIDS. Generational. Demographic cohort-wide. Irrevocable.

Next time: Mommy wars, the lesbian episode, part 2: free to be you and me.

4 thoughts on “Mommy wars, the lesbian episode, part 1: a wee bit of history”