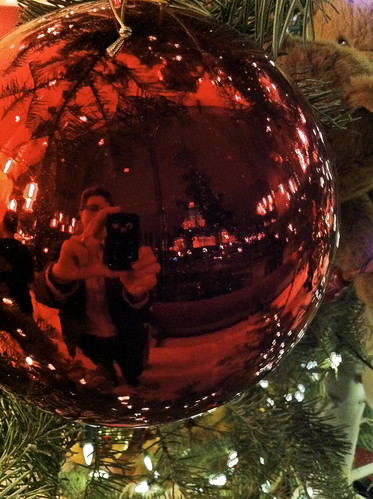 That’s San Francisco City Hall reflected in the ornament (along with your host and her partner’s camera phone). We were there (Davies) a few weeks back for a performance of John Adams’ El Niño, a gorgeous, gorgeous re-imagining of the nativity oratorio.

I didn’t write much about it at the time because I returned from that date (the first in a long while) to find an egregiously hi-jacked blog, which is to say other (quite cranky) folks’ messages were being broadcast out of this URL frequency, and not mine. I spent the better part of the rest of that night, ’til the wee hours and on into the weekend, back and forth with the good folks at my blog host trying to un-hijack it. Instead, I would rather have been waxing lyrical about the oratorio, about what a job it must be to try to set to music the kinda challenging event of the annunciation and/or sex with god, or at least insemination by god, or whatever you want to call the whole big ole conception of the Baby Jesus thing. John Adams’ take on it, musically, is as tremendous as it ought to be.

Someone videotaped their videotape (or DVD) of the very passage where the incomparable Lorraine Hunt Lieberson (and, eventually, 2:30 in, a big ole chorus) sings the event. Three angelic countertenor “angels” sing following it, and Dawn Upshaw (the other Mary) appears at the close of this clip:

This December in San Francisco, Dawn Upshaw and all three original countertenors were there. Michelle deYoung sang the part of Mary that was created by Lorraine Hunt Lieberson, who died in 2006 after a long battle with breast cancer. While Ms. deYoung sang beautifully, it was impossible to not hear the luminous, clear, llena voice of Lorraine Hunt Lieberson, weaving around and permeating all the empty spaces in Ms. deYoung’s voice. Which you might not know were there, had you not seen and heard Ms. Hunt Lieberson’s performance of the role.

Seven years ago my beloved had studied and studied the El Niño score in preparation for an audition to act as Ms. Hunt Lieberson’s understudy for the 2003 Los Angeles premiere of the oratorio. We watched the only video recording of it on a DVD player her brother had especially purchased for the occasion, since it was a French recording of the oratorio’s premiere in Paris, and otherwise not viewable on domestic DVD players (which we didn’t own, anyhow).

One rainy winter night, accompanied by an old friend and accompanist (this one!), my beloved drove over to John Adams’ house in the Berkeley hills, introduced herself, took a sip of water, steadied her nerves, and sang and acted and acted and sang, trying hard to keep a mirage of Ms. Hunt Lieberson from obscuring her famously laser focus on whatever it is one finds and holds onto for dear life as a singing actor. The emotional truth at the marrow of a song, delivered with sound and word. Mr. Adams was very gracious; the beloved felt she didn’t “splat,” as they call it in the opera singing business, but she didin’t think she delivered her best performance. Auditions are hard enough in the first place; auditioning in front of one of the greatest living composers in his home, next to Monserrat Caballé’s piano, is a teensy bit more challenging than usual. Even for a seasoned pro like the mother of my children.

That encounter with El Niño and its composer and Lorraine Hunt Lieberson didn’t bear fruit in my beloved’s big break. For which, frankly, I’m hugely grateful. Had she gotten the understudy gig, it’s fairly certain that our own niños would not have followed in the way or at the time they did. That wet winter night the beloved’s body was healing from a miscarriage some nine months earlier, and we were preparing emotionally for the return to our family-making, contingent, as always, on the circuitous travels our working lives were following. A year later all would be changed.

That coming fall, it would be a conversation following the death of a dear friend’s mother that would open up the offer of a new donor — and with him, a whole donor-family. Christmas morning at the end of that year, we would discover my beloved was pregnant with the miracle that would be our own first child. When this child was just half-formed in utero, my oldest nephew would be diagnosed with a brain and spinal cord cancer that would take his life not six months after our daughter was born. On the morning of the six-week anniversary of our daughter’s birth — it was nearly a year to the day that my other old friend’s mother had died; we were to have a party that day, welcoming our daughter to the world — the 14-year partner of my oldest and dearest friend was killed in an accident.

Death/birth/death/birth, figurative and literal. Our minds and hearts were split wide open, and have never shut the same way since. Â The closest thing to an insemination by god as a pair of pagan/animist/Buddhists could get, I reckon.