This is a sponsored post written by me on behalf of Barilla, but opinions are my own.

My beloved and I distinctly remember the moment.  We were sitting at our dinner table in our first wee home. We locked eyes, and said to each other: “We’re ready.”  Ready, finally, to take the leap from where we were – a family of two committed people – into the inky unknown of two-plus.  If we were the luckiest people in the world, we would be led into that unknown by a few small people we could call our children.

Turns out we were indeed the luckiest people in the world.  My beloved’s will and bodily fortitude coupled not just with my own love and dedication, but with the courage and generosity of two old friends. One of them had a great idea (use my husband as your donor!), and the other of them (said husband) had great genes and an open heart.

Plenty of talking followed at each others’ dinner tables over the course of several months: we were proposing, after all, that we join our two families together with a uniquely powerful bond: children, our own and each other’s. There could be no knowing what that would feel like, yet also no going back.

Of all the things that define our family, this non-nuclear beginning will always be one of the things I cherish most. Our children are quite literally the products of the best of what humans can do with and for each other.  They are precious harvest not just of love and will,  but also courage and generosity, and trust on all four of our parts. Without all these ingredients together, my beloved’s and my children simply wouldn’t exist.

It took many years of wading into parenthood, hip-deep and goggle-eyed, ‘til my beloved and I found the breathing room to enjoy the rituals which now form the bedrock of our family traditions. First came the weeds: five years of baby+toddler-induced cluelessness and sleeplessness, exasperation and consternation, late-night book- and website- and tea-leaf consulting.  We had no choice but to be patient with ourselves; had no choice but to learn as we went along, usually from our mistakes. All along fuled by wonder and gratitude for these two small humans who once were nothing but a spark of hope between a couple across one dinner table, and then the topic of excited, four-way conversation among friends over another.

There came a point at my beloved’s and my dinner table one night, years into this family journey, when we looked up from cutting someone’s food in bite-sized bits and wiping someone’s goo from their face and locked eyes again. And in that moment we realized that, dadgum it, we did it.

These two people are now seven and nine years old, and they (usually) cut their own food, and (usually) wipe their faces. Gathering together for dinner every night is far and away the most cherished and least negotiable of our family traditions. Before we tuck in to eat we hold hands, take a few deep breaths,  and sing a song of thanks. (When we’re out at a restaurant, we lean forward and sing double-time, sotto voce, but heaven help us we still sing.)

The kids may or may not tell us what happened at school that day, or if they do, they may or may not use more than a single, one-syllable word to describe it.  We go around and do “roses and thorns,” or “apples and onions” about our days, telling high points and low. Sometimes we play round-robin memory games I played with my own family at the dinner table, like “I went to the store and bought….”   On a good night, a teaching opportunity avails itself, usually beginning as a casual thread from someone’s day, or a question.   On a really great night, as we get up and clear the dinner dishes, my beloved and I will feel as if we were able somehow to impart not just nutrition and security, but a little something important about the world.  Not just  information, whose overabundance is no longer even noticeable in our kids’ generation, but knowledge, which takes more effort. And from that a path, ultimately, to wisdom, rare indeed.

Here are some of the most important things we want them to know:

Most important, whether or not we are typical, or widely understood, or even legally recognized by the state we’re in:

This post is sponsored by Barilla. If you’ve read this blog for any stretch of time, you’ll know that in eight years, while I ran ads for a time, only a few times have I published a compensated post as part of a larger campaign to raise awareness of issues like the fight against cancer, or access to childhood vaccines.   I want my family’s dinnertime story to be a part of the larger group of stories Barilla is promoting on behalf of their #ShareTheTable campaign to raise support for Feeding America. (Feeding America is the nation’s largest organization dedicated to fighting domestic hunger through a network of food banks, and Barilla supports that goal.)

Why? First, they asked, which in this case means a lot. Company head Guido Barilla was challenged in an interview last fall for his not including gay families in his ads; he honestly shared his views about family, which didn’t yet include support of families like mine.  What ensued has been a very public, very valuable learning process for him and his company regarding just how many folks, LGBT and ally, feel strongly about companies supporting LGBT people and family diversity.  Inviting family stories from LGBT bloggers to be read alongside of others in this Feeding America campaign is just one of many steps I’m  glad to see them taking.  And they’ve asked for not just my family story, but those of other LGBT parent bloggers I respect as well. (My old friend Vikki, of Up Popped a Fox, among them.)

Real change takes work, and if my own experience is any guide, the greatest opportunities to make change come in the wake of the hardest times.  Change for the better (like so many precious things) takes time, and will, and the generosity of others along the way.  Those are morsels of wisdom I hope my beloved and I impart to our kids every night over the dinners we are lucky to keep eating together.  The #ShareTheTable campaign generates material support for Feeding America, and it does so by encouraging families of all kinds – mine included, and I hope yours too – to be the faces of it.  To this I say: Buon appetito! 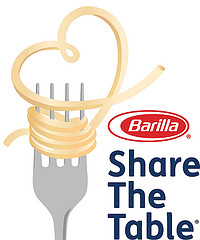 This is a sponsored post written by me on behalf of Barilla. For every post using #ShareTheTable from now until 4/30/14, Barilla will donate a monetary equivalent of ten meals ($1.11) to Feeding America®, up to 1 million meals. Barilla will donate a maximum of $110,000.  One dollar helps provide 9 meals secured by Feeding America® on behalf of local member food banks.

5 thoughts on “Sharing the table”