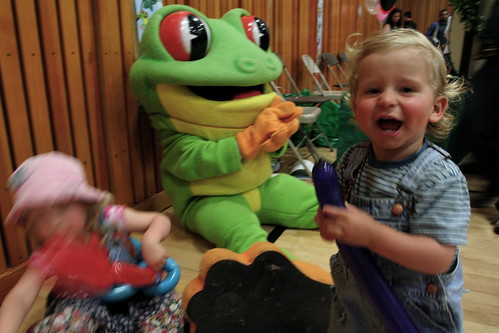 Our Family Coalition, the Bay Area’s queer family organization, held its tenth annual LGBTQ Family Night at the Berkeley YMCA this past weekend. And I won’t be the only one to tell you that when they say in their notices about the event that “hordes” of LGBTQ parents and their children attend, they are not exaggerating. The hordes were even more copious this year than first time we went, two years ago.

Back then, we were shaky and vulnerable following the year anniversary of our nephew’s death. It was our first outing to an Our Family event, a sign, at least to me, that we were beginning to restore to ourselves some of the resources I had once imagined we’d be in the thick of, back before our nephew’s cancer battle broke open the ground underneath our feet, transforming our hearts, our priorities, and our capacities. The first half of our daughter’s first year was consumed with the fight for his life; the year following that, we simply made do, holding our daughter and each other close. We made very little in the way of connection outside our immediate sphere of family and friends.

That spring two years ago, we steered our weary trio into the Y and were met with hundreds upon hundreds of queer families; many with kids around our girlie’s age, but even more of them farther down the path than we were. It was heartening, absolutely; inspirational. But all of it was in greater volume than our grief-thin skins could bear. So we packed up after dinner and headed home, exhausted.

We actually skipped the festivities the next year, deciding at the last minute that we didn’t have it in us. What ground we had gained in our recovery from sorrow had been lost to the strain of the First Year of the Second Kid. And by spring, we’d gotten far enough into that year to know that we were not up to juggling the both the kids amidst swarms of other people. Even if they were supportive, fun-filled swarms, reflective of the sex/gender demographic of our family unit. “Know your limits!” and “Less is way more than enough!” were the rallying cries of the time.

This year, though, things were different.

We are becoming accustomed to the twitches and itches of the phantom limb of grief. We’re about as sleep-deprived as we were when the lil’ peanut was a few months old, but now it’s become so deeply massaged into our psyches that we forgot how zippy our brains once were when they were sufficiently rested.

We’ve mastered the caregiver-in-a-crowd hand commands: this gesture means “I’ve got him; you get her!” This one is “Throw me a clean-up rag, S.T.A.T.!” This one, “Look over there, she’s (/he’s) moving out of range!” And so on. For better and for worse, both of the kids are ambulatory, now, and nearly equally steady on their feet. One of them seems to be as fluent as your average sixth grader, and she might — just might! — even be able to talk a friendly adult through the process of finding us, were she to become lost. This year we knew in advance there’d be hordes, and we said: Bring it! Or rather, let’s us bring ourselves!

Waves upon waves of boistrous queer families greeted us upon arrival, along with friendly YMCA and Our Family staffers and volunteers. Bless their souls, they had name tags, and I just had to remove the sticker that was adorning the lil’ monkey’s overalls front (pictured below right) in order to affix her name tag. Darn. 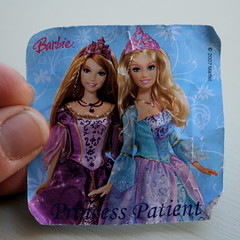 (Some subversive element at the doctor’s office palmed this to her, even when all she did there was observe her brother’s appointment, so really she was only a Princess Witness. I’m telling you, it’s a freakin’ global conspiracy.)

Queer family fun was happening all over the Y: swimming in the various pools, tumbling in the “Kindergym,” b-ball on the courts, yet more older kid tumbling in another room. Face painting, balloons. And a spread of food and rows and rows of brightly decorated tables in the main room. One of the founders of the group that long ago morphed into Our Family was celebrated, as were YMCA and Our Family staff who pulled off the event. Berkeley School Board and City Council members spoke, and celebrated Our Family and our families. The partnership between the Berkeley YMCA and Our Family, director Judy Appel told us, was longstanding, strong, and unique. The success of the evening said as much, even if some didn’t hear Judy’s words over the cacaphony of squealing kids and schmoozing parents.

For our kids, the brief words and even the raffle (including an R Family cruise for four! dang!) were of less interest than “Cha!Cha!” the giant walking tree frog, courtesy of one of the event participants, the Rainforest Cafe. Cha!Cha!’s zoological genus and species were a source of great interest to the lil’ monkey. “At first, I thought it was a walking stuffed animal,” she said. Then she asked whether there was a person in there. I mean really. She’s three and a half. Couldn’t she have suspended the child-like belief in the impossible for at least a few more months?

The beloved, remembering a hot, muggy, summer job at the Minnesota State Fair as “Scoop,” the Minneapolis Star-Tribune bear, said, “Yes, honey, there is a person in there, and it’s a really tough job. It can get hot in there. And then older kids can be real a-holes, and ask whether you’re a boy or a girl, and incessantly poke where they think your breasts are to find out, and sometimes you just lose your temper and you pull your stuffed head off and you yell obscenities at them, and they scream and run away crying. And even though you feel bad, you’re young enough to feel good, too.”

Okay, maybe she didn’t say all these things. But I know she thought them. 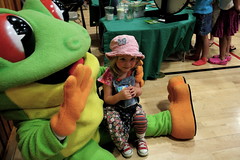 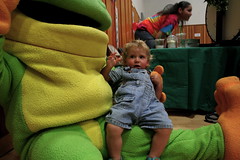 Knowing that a long-suffering human being was animating the giant tree frog didn’t dampen the lil’ monkey’s entrancement, fortunately, and she managed to do everything but propose marriage to it. One gal was trying to introduce her impossibly adorable little son to it, lowering him down to sit on the frog. But he kept curling his legs in at the last minute. “Not gonna put me in that thing’s lap! Eyes too big!”

Okay, so he was too young to talk. But I bet he was thinking that.

The lil’ peanut watched his sister’s love affair with the frog, and slowly worked his courage up to snuggle. All went well, ’til the frog gently patted the little guy on the back. “Woah! Hey! Hold your horses, partner! I don’t even know your last name yet!”

Okay, he probably wasn’t even thinking that. Everything was probably a big blank.

We switched the little nippers into their jammies in the locker room (hey, they might fall asleep during the ten minute walk home!), and yet more fun was had climbing in and out of the lockers. Finally, with everyone bundled up and the littlest tanked up on his evening mama milk nosh, we rolled out of the building and through the unseasonably warm night streets. The scent of jasmine wafted on us here and there. The lil’ monkey looked up and saw something she rarely sees: stars.

I once told her that I used to think that the first star I saw in the night sky was my mother, reminding me she was always there. In the daytime I couldn’t see her, but she winked at me in the gloaming.

Don’t think I ever pass up an opportunity to lay that blanket down for her. One day she’ll need it, and remember.

“I like to think that all the stars are the loved ones of those of us down here, reminding us they’re always there,” I told her, probably at least a year ago.

This weekend, as we strolled through the neighborhood back home, her brother nodding off in his lower berth in the stroller, she looked up into the dark sky. “Look!” she pointed. “That one’s Maxie!”*