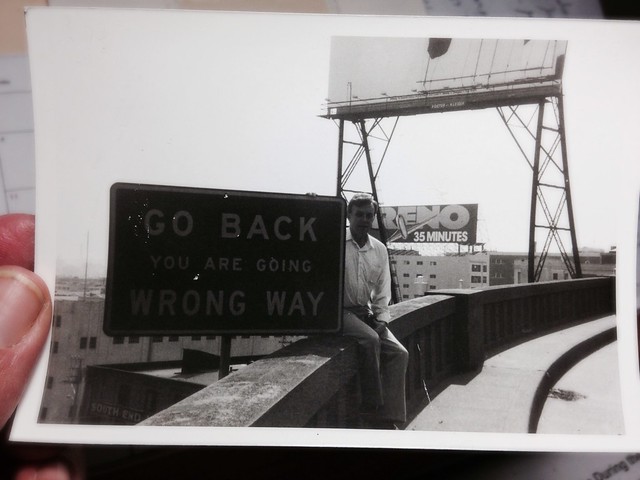 Honestly, here’s what I remember. I remember us driving along the freeway, heading into San Francisco, around about the point where Interstate 80, the Bayshore Freeway, branches off due west and into central San Francisco. I remember us thinking somehow that this sign was hilarious, and then actually stopping the car along the freeway (was there some lane blocked off for road work that made this less insane, and actually plausible? one can only hope), hopping out, the both of us, him going to pose next to the sign (oh, yes, that is a four-plus story drop behind him), and me pulling out my trusty Olympus OM-1 SLR film camera, and taking this picture. Circa sometime in the late 1970s, maybe 1980.

What, exactly, about the sign we found hilarious, I can’t remember now. The thought that: DUH! If you are reading this right now of course you are going the wrong way. Maybe the lack of the article “the,” due, one must imagine, to the exigencies of getting the urgent message across: STOP, FERCHRISSAKES! Maybe also just the stark Puritanism of the statement, generally speaking.

But I know that I have kept this photograph through the decades, a badge of his willingness to pretty much go along with anything that smacked of adventure with his daughters. A sign of his inextinguishable sense of humor. A reminder to try very hard never to take anything, even what seems like the gravest calamity, without a hint of mirth.