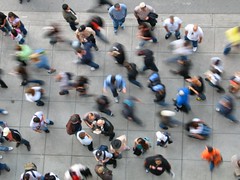 I keep threatening to write a Manifesto for Monotaskers, but I can never find the time to give it my undivided attention. You think Iâ€™m kidding. Iâ€™m not.

For a very long time â€“ since I first heard the word used, by a busy friend in front of her computer, as it happens, in the early 1990s â€“ I have been deeply suspicious of multitasking. Suspicious of the speed at which modern urban life is hurtling. Suspicious of what would happen to us if we, ever so gradually — barely noticing the loss it would be so gradual — ceased to truly, madly, deeply engage in what we were doing.

Oh, I know what some of you are going to say, since parts of me think that way, too. We rush through the insignificant stuff, we say, so that we can dwell on the significant stuff. To hasten our arrival at the significant stuff, we habituate ourselves to a life of frequent if not constant haste, and to the use of various labor- or time-saving devices. And yet these very aids often draw us into a kind of Sisyphean relationship with them, in which the time potentially saved by the device is quickly squandered on learning how to use it, or yet another labor- or time-saving device. For all our devices, not enough of us feel as though we have time to dwell on the significant stuff. Folks still feel as busy or busier than ever. And all of this presumes that there was something terribly wrong with paying attention to the labor itself in the first place, something wrong with paying attention for its own sake.

In the fall of 1999, I read with interest Barabara Ehrenreich’s review of James Gleick’s Faster: The Acceleration of Just About Everything. The review was so intelligent I felt I didn’t really need to get the book. Plus I didn’t feel I had the time to read it. Don’t worry, Ehrenreich acknowledges that in the opening sentences of her piece:

One of the gists of the book (according to the reviews I’ve read, and the excerpts I’ve skimmed!) is that that technological advances are shrinking the time it takes to facilitate ever so much â€“ communication, movement through space from hither to yon, you name it â€“ and yet the human body hasn’t changed all that much over the millennia. Its durability has not increased at the pace everything else has; the time it takes an impulse to travel through all the neurons and dendrites to and from the brain is not in the process of speeding up, even over the course of a few more millennia, at anywhere near the rate your personal computer has sped up over the course of a decade. But here’s why I like Ehrenreich on Gleick and speed, more than I’m tempted to directly read Gleick on speed:

So is it a good thing — this multiple-interfacing, hyper-wired, globalized, caffeine-driven, profit-maximizing, millions-of-bits-per-second whatever that we’re caught up in? Over all, Gleick thinks yes, though this means gliding right past questions like what’s become of our attention spans or whether we’re really better off with 500 channels of incoming information if they’re all about Monica.

In the September 2006 issue of First Monday, David M. Levy published an intriguing essay extending these concerns. In “More, Faster, Better: Governance in an Age of Overload, Busyness, and Speed,” Levy articulates an “environmentalism for the information age,” one which cultivates “sanctuaries in time and space.”

Without adequate time to think and reflect, time to listen, and time to cultivate our humanity, and without spaces that are protected from the constant intrusion of information and noise, I do not see how we can respond to the innumerable social and political challenges of the new millennium with the quality of attention they deserve. In order to rectify this state of affairs, I will suggest that we take steps to design spaces and times for reflection and contemplation. Much as the modernâ€“day environmental movement has worked to cultivate and preserve certain natural habitats, such as wetlands and old growth forests, for the health of the planet, so too should we now begin to cultivate and preserve certain human habitats for the sake of our own wellâ€“being.

Sunday’s Washington Post piece about Joshua Bell’s commute-hour buskery provides illustration both of one of the most corrosive diseases of our age â€“ chronic obsession with speed and efficiency â€“ and its antidote: a potential space and time that could have been used for contemplation or reflection. Of course one of the ironies of the situation is that so many of the hurried and harried commuters were working to filter out the excessive influx of words and images and sounds that conspire to overwhelm. It’s just that one of those sounds might have helped mitigate the welter of others.

In my bit on it the other day, I asked folks whether they would have been more or less inclined to stop and listen for a while if they had a kid with them. I’ll admit I can’t say how long I would have lingered, but I’m pretty sure I would have stopped. My own inclinations notwithstanding â€“ as it happens, I’m quite predisposed to ambling along with scant regard for time and a high regard for violinists, wherever they may be found (can’t help it; mom was one) â€“ the main point is that, like several of you who commented on the piece, I’d slow down and stop for my kids. If job or daycare or whatever it was could at all bear the delay, I’d slow down and stop for my kids.

I would do this (A) Because showing musicians that courtesy is something I’d like to get them in the habit of. (B) Because the bigger of our kids is already clearly quite musical, and the little one smiled all the way through my bad pennywhistle concert the other night on the changing table. So I figure they’d love it. And (C) Because slowing down and stopping for my kids, whenever it’s humanly possible, looks to me to be the ticket to the good life, near as I can tell.

Seventh list of ten: Things to do whilst waiting for the birth