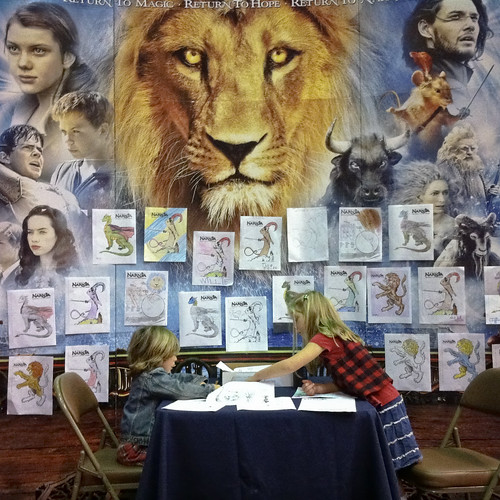 The other day we took the kiddles to their first commercial movie, out in the theater. It was a Disney number about a bunch of white people, a bitter, betraying biatch of a “mother” — where’d they think that one up? — and a spunky blond (princess!) heroine. Don’t tease me, the boy’s been obsessed about the fairy tale Rapunzel for going on a year, on account of the whole long hair thing. Who are we to deny him his simple, propaganda-dipped pleasures?

Our previous cinema forays had been limited to the Castro Theater in San Francisco on Baba’s Day for kiddle programming (Free to Be You and Me, Dottie’s Magic Pockets), usually with a gaggle of other kids with folks like us as parents. Here, we were on our own. Literally. Before the matinee in the lobby, it was us, the combo ticket-taker and popcorn-dispenser behind the concession stand, and the 13 foot-high wall of marketing material for the most recent Narnia movie, complete with the clever addition of photocopied coloring sheets, a box of crayons, and a convenient table on which to make good use of them.

Upon leaving the theater 100 minutes later, the girl child remarked thoughtfully, “In Disney movies, even though the girls are always girlish-girls, they’re usually also pretty strong.” I’ll give her that. The beloved and I agreed that the best part about the whole experience was that we could sit with the kids essentially still in our laps for over an hour, stealing kisses from their cheeks at will.