Several readers — thank you theredbaron, Jill, and COat50 — wrote me yesterday to inform me that Mitrice Richardson had been found. As in, her body had been found, life long since lost from it. (LA Times account here.)

It was another reader who informed me of her case, nearly a year ago. She thought I might be interested in trying to publicize her disappearance, partly because at the time it was getting insufficient attention from the press. That she was a Black woman mattered to me; she was likely experiencing a psychological break of sorts, untreated; also, that she was a lesbian matteredÂ (or so, at least, I gathered from some of the news reports and readers). Â All beings deserve all our love and care; some, though, get less of it from the world as it is right now, and any of us with heart-mind-gut has a special responsibility to do what they can, when they can. (Here was that first post.)

These days, I haven’t been able to do much. But I kept this notice in my blog’s sidebar since that first post, hoping someone would maybe see something or remember something or pass something on. The proverbial Hail Mary pass, the fielder’s glove tossed in the air as the ball flies past: 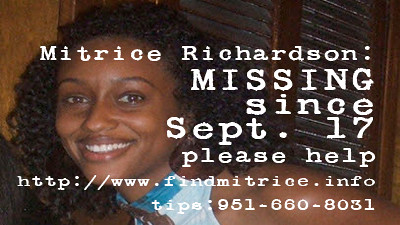 A missing 24 year-old California woman and her family need your help. Please visit findmitrice.info and spread the word & her likeness, particularly to folks in and around California.

There is some mainstream coverage of her body’s discovery, but this DailyKos diary by Adept2u, which my friend (and frequent LD commenter) lizk just sent, I think is the best one to read. A middle class white woman in a similar state would not, I believe, have been released into the dark of night like that. If she was arrested in the first place. Period.

Since I heard the news,Â I’ve been thinking of Mitrice, her last days and hours, the fragility of life, the seemingly endless process of fixing the broken parts of our shared social world. Thinking how I felt, too, upon hearing of Oscar Grant’s murder at the beginning of this year. Near on the same time I heard about Mitrice, I heard about another old friend who died suddenly. Long ago, during some intense, late-night conversation around work at his dinner table, he asked me to help edit his autobiography, when he got around to writing it. Â The request was an honor, and each time we met since then we’d mark off time, wondering if he was ready yet. Instead, I’ll be at his service this evening, thinking about him and his family, and Mitrice and her family, and how very little time we have here to do so very much.