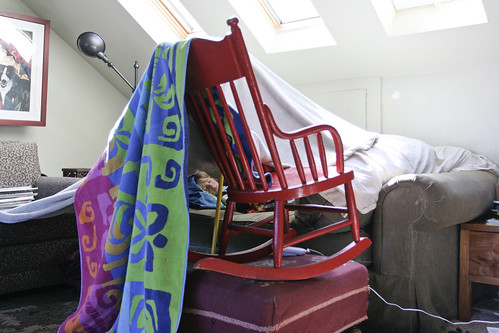 This is what greeted me when I returned from a morning away, with Grandma on grandson duty. Â From every other angle it’s an elaborate drape of blankets, towels, and sheets. Â But through this one peep-hole, you can see theÂ raison d’etre.

That little computer mouse-shaped object at the end of the white cord, sitting on the footstool under the rocking chair? It’s the baby monitor, piping in the Indian flute music the kids often listen to as they go to sleep. (We finally played the Jane Siberry Hush album into a pulp. Â Apparently you can do that to a CD.)

“I hope you don’t mind, but he really wanted to take his nap in the fort,” was the essence of what Grandma conveyed. “He promised me he’d go willingly to his bed if he didn’t stay quiet and go to sleep.”

This Grandma has spent her life in the theater, you see, and does things with rubber bands, twist-ties, and duct tape that would make any upstanding engineer convulse with horror. “Long as it lasts the run of the show and you don’t see it from the first row!” is the theater denizen’s rallying cry. Â Works like a dream on the grandkids, too.

You leave the room for just one eensy, teensy moment

Cupcake face does not lie