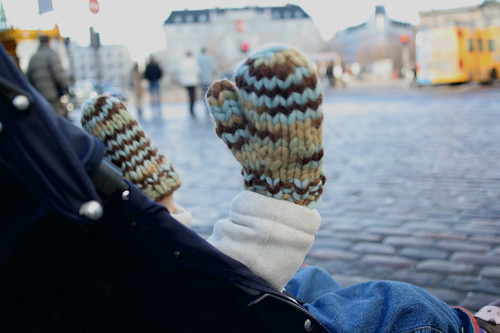 Part of an ongoing series of four-year-old pictures, because that’s when I was in Copenhagen last (okay, okay, also that was the ONLY time I have ever been in Copenhagen), and I’m on a kick to promote attention, in my own tiny way, to the Climate Conference talks there.

Round up of Monday’s proceedings here.

Above, a pair of nice, cozy Danish mittens, spending the 60-120 seconds they typically spent on our then one-year old daughter before they got flung hither and thither onto the cobblestones. Thank heavens we live in coastal California, where most of the time (this week excepted) one doesn’t need to mitten up one’s kid’s digits to keep them from turning blue and dropping off. Â But they were cute mittens, though.