Lately I’ve been posting more pictures here than usual, and whether or not they succeed in conveying a thousand words, from time to time and for one reason or another,Â Â it’s the best I can do.

So! Today, I’ve struck a compromise: an image of text, which itself depicts an amalgam of multiple, very short bits of text I’ve posted elsewhere. Â After blogger chum Liza Tweeted her “tweet cloud,” I was temptedÂ Â to figure out what my “tweet cloud” would look like. I’m going to presume that if you are reading a blog, then you are, for better or worse, familiar with Twitter, and therefore also the term Tweets, and also (probably?) the quasi-related concept of a text-generated “cloud.” [If no, see the fine print at the end of this post.] Here’s my tweet cloud: 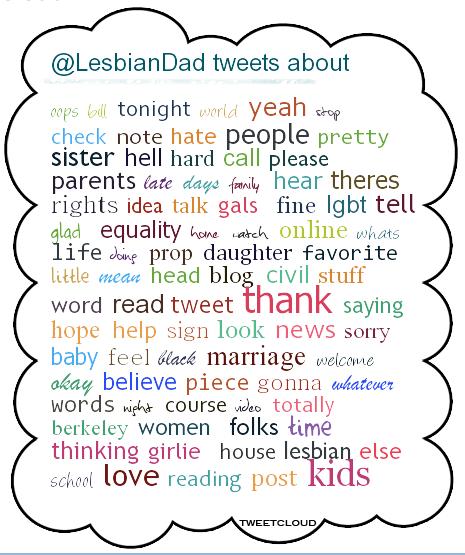 At first I was sure it was wrong. Just like when you hear your voice on an answering machine message or some such, you’re all, “No way could that be me!” Or in my case, “Who gagged me and hoodwinked a 13 year-old boy to speak in my place?” Â But upon second and third thought, I had to accept that the program that amasses and sorts and ranks words is fairly undiscriminating (or rather, it discriminates to the point of omitting “and” and “the” and similar syntactic glue.

Fans of Edward Tufte and the whole fascinating world of the visual depiction of quantitative information ofÂ saw this “text cloud” thing gathering on the horizon before any precipitation began to drop, of course. What’s fun is seeing how all this, along with folk taxonomies and all the other fun intellectual neologisms of the internet continue to emerge and evolve.

Making it up as we go along

2 thoughts on “A synopsis of a synopsis”