And I couldn’t agree more with it. (Statement’s after the photo below; first a little context.)

I just got this statement in the mail from Our Family Coalition, of which I am a very supportive and proud member. Â In the note accompanying the statement, Judy Appel of Our Family also said:

We have also expressed our solidarity with a strong coalition of organizations representing LGBTQ people of color, youth, and families who have called on our community to prepare past 2010 by issuing a statement entitled “Prepare to Prevail.”

There are other groups and leaders who are beginning to the lay the groundwork to get a repeal of Prop 8 on the ballot for 2010. While we disagree with their current strategy decisions, we applaud their dedication and passion for equality.

No matter when we go to the ballot, one thing can be sure, we will be right there fighting for and supporting LGBTQ-headed families.

Our Family is sponsoring two different LGBTQ Family Equality forums for their members to discuss the impact of this whole battle on us: one in the East Bay tonight, and another in San Francisco next week. I am aggrieved to say that I am unable to attend either, so I (a) won’t be able to report on them, and (b) am hoping someone else who goes will able to share. I’ve asked whether they’ll videotape them and/or whether some of what is shared there might be shared further.

I have gobs of thoughts about the whole 2010 vs. 2012 shebang, but will expound on them more at a later point. Short version for now is, I respect the people who are in and who are providing leadership for the organizations behind this statement. They are human beings, and the several I know personally work their ASSES off for our well-being, are not living bloated, cocktail-party ridden lives at a distance from the issues. They are parents, they are people who gave blood over the last go ’round with this battle. Â They are working for their own well-being as well as that of other families whose interests they represent. Â Most important, perhaps, they are working on behalf of their own kids.

As queer parents of kids in queer families, directly in the campaign cross-hairs, they do not take any of these matters lightly, and the call to go back to the ballot box more carefully is not a call to sit down and be passive, a sophistry I’m growing tired of reading. Â AÂ marathon takes more dedication than a sprint. AsÂ one who never has and never will run a marathon road race — and asÂ one who’s my third decade of active LGBT civil rights work — I think I can say this with a certain amount of confidence. 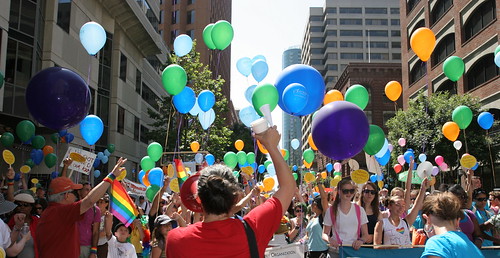 At What Cost? Protecting Our Youth In Our Fight for Marriage EqualityÂ

We represent grassroots and advocacy organizations dedicated to promoting the wellbeing and safety of lesbian, gay, bisexual, transgender, queer, and/or questioning (LGBTQ) youth, youth with LGBTQ parents, and LGBTQ parents in California.Â  Over the last several decades, we have worked hard to create safer schools for LGBTQ youth and families, and California today is one of the most welcoming states for our youth and families, with some of the most protective laws in the nation.Â  It is our position that the price of a ballot initiative campaign in 2010 to the health and wellbeing of our youth and families would be too high.Â

Following the passage of PropositionÂ 8, our organizations have seen a significant increase in discrimination and harassment of LGBTQ youth and children of LGBTQ parents in California schools, requiring legal or other administrative intervention.Â  This harassment has been damaging to youth, impacting their psychosocial and academic success.Â  Moreover, its ongoing negative impact hurts not only LGBTQ youth and children of LGBTQ parents, but overall school safety.Â  Our organizations have also experienced first hand a chilling effect on the safe schools work we do in local communities throughout California: starting even before the election, administrators, school board members, and teachers have been increasingly reluctant to embrace our efforts to provide anti-bias education in schools to make schools more inclusive of LGBTQ youth and families and safer places for them to focus on learning.Â

Given the YesÂ onÂ 8 Campaign’s focus on the inclusion of LGBTQ issues in schools-as well as the newly heightened awareness and politicization around the state of LGBTQ issues due to the PropositionÂ 8 campaign more generally-it is perhaps unsurprising that our schools have become battlegrounds on these issues.Â  Nonetheless, the Yes on 8 campaign has unquestionably made our work harder, and put many already vulnerable LGBTQ youth and families at even greater risk.Â

As organizations that work every day to achieve equal rights and equal opportunities for LGBTQ people and families, we are intimately familiar with the harms imposed each day that we live without full marriage equality.Â  And we are acutely aware that the passage of Proposition 8 affected a generation of LGBTQ youth and their peers, who were told that they are not equal.Â  We also believe, however, that another failed campaign will multiply this impact.Â

As much as we want to repeal PropositionÂ 8, we are deeply concerned about bringing a repeal initiative to the voters before we believe that we can win.Â  And we do not think that such a victory is likely as early as 2010.Â  Any campaign on marriage equality will include the same schools-related rhetoric that we heard from the YesÂ onÂ 8 Campaign, and we expect that we will see a similar result: increased harassment and bullying of LGBTQ youth and families in our schools, and an even further chilling effect on critical anti-bias safe schools work. Â

When we do bring a repeal initiative to the voters, we need to make sure we can win.Â  Winning must include effective messaging that defuses our opposition’s scare tactics about LGBTQ issues in schools, and that doesn’t do any long-term damage to efforts to create safe, inclusive schools for all youth and families.Â  While many groups are working on such messaging, its successful implementation will take time.Â  This is especially true in our current economic climate, where the budget cuts to our schools will inevitably limit their ability to help address discrimination and harassment and where our community’s capacity to do safe schools work is also reduced.Â

We, and the youth we care so dearly about, hold precious the value of winning marriage equality. We feel that the best course of action to achieve this end is not to pursue a ballot initiative campaign to repeal PropositionÂ 8 in 2010, and whenever a campaign is pursued it is not done at the expense of our youth and families.Â
Â

Short takes on the big break in the long fight

Equality for All News Alert