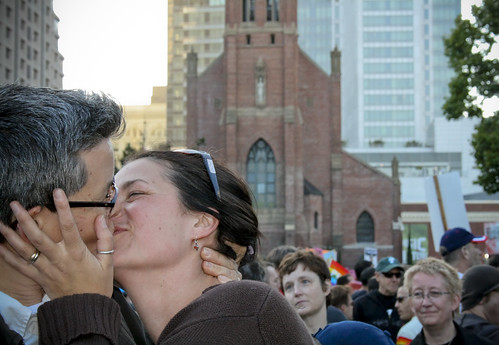 Meanwhile, love’s healing, conquering power does hold true for me, my beloved, and the family we’ve hatched (with the help of what else? love!). Â Sometimes, when push comes to shove — and daggone there’s been a lot of shoving lately — I have to feel that that’ll do.

So endeth a month of photos, or so it was supposed to be (photos only). Â As expected, I couldn’t resist sneaking a word or two as accompaniment. Â Sometimes it was just a word or two and no photo. Â And as expected, I spent most of the month waiting for the other shoe to fall. Â Shoe 1 being: the election which removed our constitutionally recognized right to support our family structure with state recognition equivalent to those our heterosexual brothers and sisters enjoy. Shoe 2 being: the Supreme Court’s decision on whether or not this was fair and right.

In spite of what we hoped for, most of us anticipated this second shoe would fall on our heads, and lo, it did. Â Those LGBT folk who had scuttled on board the S.S. Matrimony before the gangplank was yanked up on election day now enjoy the dubious distinction of a legal umbrella under which we may feel protected, as we watch shoes rain down on our people as a carefully carved out, exceptional class. A second class citizenry, marked off merely by whom we love, now duly noted as such in the state’s constitution. Â It’s not a sight I intend to look upon passively, and nor should anyone who agrees that love — real love; true love; love unconditional — matters. Â I frankly don’t think it’s a nice, sweet addition to life. I think it’s the glue that holds us together, period.Â

If you agree, and you can go, please say so in Fresno tomorrow, May 30, at 1pm, in front of City Hall: Â Meet in the Middle 4 Equality.

It’s no coincidence that in San Francisco on Tuesday, Â the rally to protest this Supreme Court decision and the heterosexist/homophobic bias it upheld ended at Yerba Buena Gardens. Â The modest-sized park is bounded on the one side by a church and on the other side by a monument to the Reverend Dr. Martin Luther King, Jr., our nation’s most honored champion of the untouchable power of love woven with justice. Â Various of his words are carved onto marble and brass, behind a mighty curtain of water. Â Among them, from his “I Have a Dream” speech: “No. No, we are not satisfied, and we will not be satisfied until justice rolls down like water and righteousness like a mighty stream.”Â

Last words in verse, with apologies to T.S. Elliot: