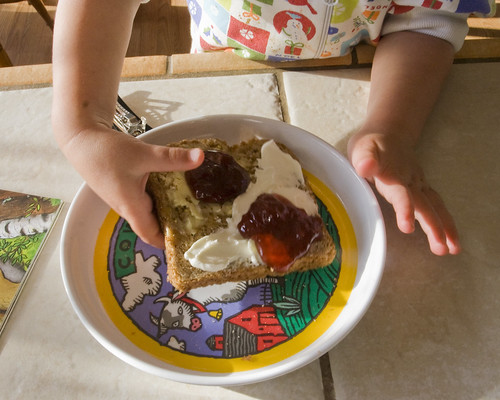 Yeah, don’t even talk to me about the quantity of jam on this here toast. Â In the amount of time it took me to broker this compromise breakfast, I could have planted a strawberry seed, nurtured the plant to blossoming and producing ripe strawberries, picked ’em, and then cooked ’em up into jam. Â Is what I’m saying.

B: Okay, fine: bagel. You could be more gracious about it. Â

B: Great: toast it is. Â Cream cheese on it?

B: Have it your way, butter. But just for today, and that’s my final offer.

And then we switch positions and start all over.

(Why not just cram porridge down his ungrateful little maw and be done with it, you ask? Easier said than done, is all I can say. Â Why not tell him: “It’s my way or the highway, bub! You don’t like what we got at this restaurant, find yourself another restaurant, or better yet, starve!” To which I say: why weren’t you there helping me with these bright ideas when I needed them?! I just get worn down and sucked into it and I’m like some dang yokum dupe at a New York City sidewalk hustler’s shell and pea game ’til five minutes into it, at which point I go “Daggone it he’s done it again!” Or some such.)

If I hadn’t lived through hurricane toddler before, I’d be face down on the boxing ring mat around about now, his tiny foot would be on my back, his inky dinky fists raised in triumph. Instead, nowadays I am upright, if on the ropes, with a shred of my dignity intact.

I brokered a deal and made a halvesies toast, all the while delivering a lecture about the value of compromise. Â I hovered the plate just outside of his arm’s reach while I reminded him that I might have been willing to strike a bargain this time, but what I hope to encourage him to do is to take what is given with gratitude, like a good proto-Buddhist. (Not that he’s practicing, but whatever. It doesn’t hurt to lay the foundation early.)Â