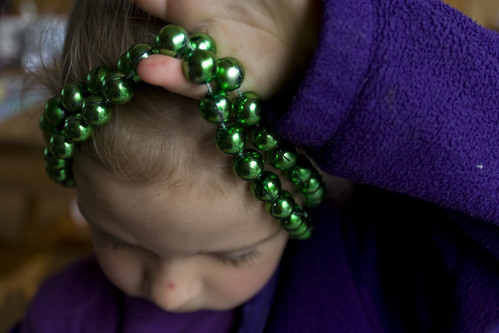 Thank heavens I put a note on the calendar, a few weeks back, reminding me to stick some green on the girl before she went to school today.  I was fairly sure we’d be in our customary media/culture blackout, and would forget the day, and she’d come home black and blue from being pinched for not wearing green.

Do I truly understand the symbolic significance of this color?  Of course not.  (Here’s Prof. Wikipedia on the topic for you.) I just know I was pinched when I was a child, and lord love me I’m not having my daughter pinched over that.  Worse things are waiting down the pike for her, I fear, what with her being the daughter of people currently considered by many to be responsible for the Downfall of the American Family, expressly worthy of being singled out in the state’s constitution and the nation’s laws about family formation, recognition, and support.  We can’t afford the playful, mirth-filled schoolyard ethnic harassment.

Stock-wise,  I am part Irish.  I think.  It pertains to my everyday life in the way such non-Jewish, white ethnicity tends to pertain for folks who grew up when, where, and how I did.  Which is to say: not so very much.  It influenced my parents’ experiences and values, and so of course it’s shaped me.  But I can’t make out the fingerprints anymore.

My parents’ parents (and their parents) were  variously German, English, Scottish, Irish, and Scotch-Irish.  Some were 100%, like my paternal grandfather (all German) or my maternal grandmother (all English).  The rest were a British Isles mix.  The Scotch-Irish band could very well have been more Irish than Scots, or perhaps more to the point, more Protestant. What I remember most vividly about St. Patrick’s Days of my youth is my mother pinning a little orange on us, amidst the green.  As I recall, it was a cheery little gesture toward the Scots part in us.  At least that’s what she said.  Something about William of Orange.

Who knew it was actually a symbol of Protestant defiance to Irish Catholicism?  Ducky. Whether or not our mother wittingly sent us off to school with our dukes up, so to speak, remains unclear to me.  It would not have been like her, I’ll say that.  It was probably just  something from her youth. A vaguely defined tradition she picked up from one or both of her parents.  Some cultural practices get  passed along like words in a game of “telphone,” one generation hearing a snippit of this, and passing on a dash of that.  Like a drift of song lyric, memorized phonetically.* Fortunately, in my slice of 1960s and 70s California suburbia, none of the other kids at school knew what the Sam Hill our little orange swatches meant, and my sister and I made it through our early years unscathed.  We were lucky.

Our daughter’s first name is taken from my mother’s maiden name. My maternal grandfather, the one who gets credit for my mom’s maiden name, was the Scotch-Irish one.  Emphasis on the Scotch.  Apparently the highland clan for whom he was named was among the bloodiest.  The motto, in Latin, on their crest: Conquer or die. I’m hoping for something a little softer for our kids.  Something a bit less confrontational, a bit more lovey-dovey.

In a family like ours, defined by its social bonds rather than its biological ones, bloodlines take on a different significance.  They might supply some of the raw material for stories we tell one another, like the leprechauns and fairies that so richly populate our kids’ imaginations right now. But they aren’t the story.  The story is not about what those protagonists are, but what they do, and why — essentially, the values they foster and respond to in the plot lines.  I like to think that the values that shape our family — loving kindness, compassion, wisdom, mindfulness — are ones that our various ancestors, both social and biological, would have approved of.  Even if they appear now in unfamiliar garb.  If it’s only a dream, don’t pinch me.

* Did you just think “‘Scuse me while I kiss this guy”? If so, you have to have more mondegreen fun over here, a veritable cornucopia of misheard lyrics.