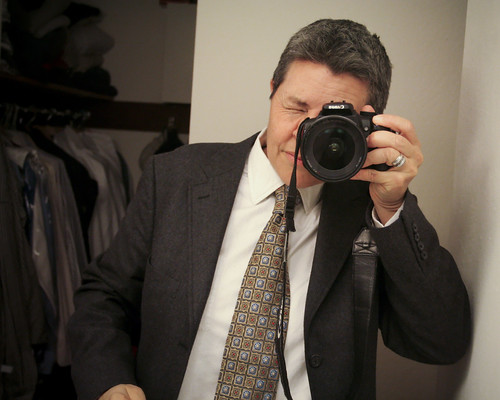 Ever since he turned 80, my sister has thrown our dad a lavish birthday dinner party at her place (our childhood home).  She urges him to invite as many close personal friends as he likes.  She prepares never less than a four course meal; the first year it was seven.

Exceptions have been made, for a few of the intervening years: eclipsing family events or, thereafter, her living out of the country a bit.

This year she jumped out the gate and celebrated him a month early, since she’ll be in the Phillipines watching a friend get married during Pops’ 88th birthday proper, upcoming in January.  Whenever my sister throws a dinner party, no one asks too many questions about the occasion, or its timing.  They just ask what time dinner will be served.

Kidcare responsibilities back home meant I couldn’t arrive to be of any help with the food prep, but I was ready to waitron like I never waitron’ed before: this year, Pops’ close personal friends numbered upwards of 23.  Fortunately the kitchen/service staff also included my sister’s husband, their son, his chum (son of my sister’s best friend), my sister’s best friend, her husband, and a very gracious Norwegian family member in town for a visit.

I knew Pops had rented  a tux for the occasion, and my Norski brother-in-law was wearing one, too.  Still I was taken aback when I arrived and I was the only one among us waitstaff without a tie.  Or I should say, I was the only non-tie-wearing waitstaffer who was pained by the lack of one.  One ten-year-old  and one eleven-year-old boy had fine neckties on, and the dashing late-teens Norski family member had on my brother-in-law’s old tux, complete with matching hankie and cumberbund.

My brother-in-law witnessed my distress, and quickly offered to remedy the situation.

“Would you like to borrow a tie? I’ve got plenty.”

It was as if Eric Clapton just offered to loan me one of his guitars.  My brother-in-law, after all, is a European man whose work enables him to dress spiffy pretty much all the time.  Hell, it requires it from him.  The tux he was wearing?  His.

“Are you kidding?!” I erupt.  “Borrow one of your ties?! Jasureyoubetcha!”

Immediately he turns on his heel, and I follow his brisk pace down the hall toward their room. En route, he gets right down to business.  He’s an engineer, after all.

“I have just two questions for you.  What color is your suit, and what color are your eyes?”

“Grey, and brown,” I say, pretending as if I knew these questions were coming.  Secretly I stash them away with all the other fun info I get from perusing Details magazine waiting for my haircut at the men’s/women’s salon I go to. (Check: match tie not only to suit color but to eye color.  Niiiiiice.)

We arrive at the tie drawer, my brother-in-law pulls it open, and over two dozen beautiful ties appear, all neatly rolled up, and lined in rows.  He picks out a few promising candidates, splays them out expertly side-by-side, and provides color commentary as to their relative merits and demerits.  Finally he pulls one out that’s not too staid, but not so festive as to become giddy, and we’re agreed.

“What’s that word?” he says. “For being metropolitan, for–”

For fun later that night, when we were catching a bite between courses, he pulled out his white satin breast pocket hankie, shook it a bit, and then showed me how he does it. I was rapt.  Hankie treatment has always remained a bit enigmatic to me.  A chum over five years ago spent more than a half hour Googling and demonstrating technique (tri-fold? square-topped? multi-flagged? oh my!).  This friend should know from au courant: he’s a Baptist preacher.  Don’t think he doesn’t put the nat in natty every Sunday morning.  The gentleman in Gentleman’s Quarterly.  It was a kind of “Baptist preacher eye for the lesbian guy” kind of thing.  Effective, but almost overwhelming.  After our session I was as much intimidated as enlightened.

My brother-in-law’s current hankie treatment is the finger-draped, center pulled up, base twirled around and folded up under style.  Back in the pocket it looks so devil-may-care, so utterly impromptu.  But as with all such matters of men’s style, secretly, it’s a fine art.

9 thoughts on “A haberdashery interlude”