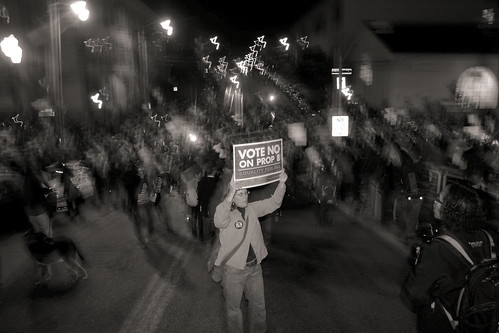 “Standing Out,” by mattymatt.  Originally in color on his Flickr photostream.  San Francisco protest of the passage of Proposition 8, Friday night, November 7, 2008.

The crowd, which clocked more blocks than your average SF pride parade (they better have!), is at this point (in the photo, that is, not in real time) heading to Dolores Park on 18th.  POV from uphill on Church.  I did read one account that said it was still ongoing as a happening as of 11pm (having started at 5:30).

Haven’t yet found extensive citizen accounts of it, but here’s mainstream media coverage at SFGate and The New York Times, something at Pam’s, and sfist, and finally a Thank You from march organizers (who were essentially grassroots, not affiliated w/ any of the primary No on 8 orgs).  In their closing words:

The gay rights community should be remembered in history as a group that did not replace bigotry with bigotry and hate with hate. Please keep the protests safe and free of violence targeted against any religion or racial minority. We need to fight, but we do not need to target.

JOIN THE IMPACT is a site that emerged to get the word out about a planned nation-wide protest on November 15th.  Locale: YOUR city hall.  DIY.

Are you a boy?