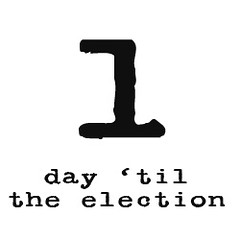 In keeping with recent LD tradition of scatter-shot, repetitive posts showing a reckless disregard for minimum standards of copyediting or continuity, I offer yet another dispatch for those not able to be spending their remaining day before the election shivering in the windy rain, passing out No on 8 leaflets.

That’s what scads and scads (exact count? dunno! thus, “scads”!) of No on 8 folks were doing today, up and down the state.  I was happy to be among the scads, and learned much (as I try to do every day on General Principle).

My station was downtown San Francisco, the business district, at a subway station exit.  I had initially thought: Geez.  Shouldn’t they post me somewhere more redneck?  Them latté-swillin’, BMW-drivin’ financiers, they don’t need my bleeding-heart liberal message!  They voted for the socialist and The Gay long ago, via mail, while they were up at their Lake Tahoe cabins.

I mean, on the subway ride over, I was subjected to a conversation by a woman who had been trying to address her cat’s anxiety-urination troubles with a cocktail of Prozac and Vicodin.  Kid you not.  Tutti frutti people like this, I tell you, they keep the reputation of this state in ship-shape nationwide.  Transplants!  Cat-loving, Prozac-pushing transplants from the Midwest, I say!  Has anyone ever caught me, or any other native-born Californian I know, feeding their cats Prozac?  I should say not!

But my thoughts about the irrelevance of our downtown visibility work? Wrong-o!

My sign-toting, leaflet distributing comrades and I were amazed that the responses went, in order of frequency:

The nicest part was the smattering of really friendly people with response #7.  Since the more it rained on us, the more dedicated we appeared.  What with the teeth chattering and the drenched shoulders and all.

Important take-home points from the above list: voters are as sick and tired of this campaign as are we campaigners, and HEY!  Just because it’s San Francisco don’t mean it’s the year-’round Summer of Love.  A “No” vote on proposition 8 is very far from in the bag.  At best, it’s lounging there right next to the bag, eyeballing it suspiciously.  And we’ve got around 24 hours now to shove it in there with all our might.

Fortunately, the clouds broke for a short time mid-morning, when the downtown contingent was redirected to Civic Center, where early voting was going on in City Hall.

Irony #736, in the ongoing cavalcade of ironies, is that the last time I was here was to get legally married.

This last vignette is for the “Welcome to San Francisco, now go home” department, Special Election Sub-file.  The chipper, unassuming No on 8 volunteer Chrys, shown below, repeated the No on 8 mantra to a passerby: “Proposition 8 writes discrimination into the constitution, it’s unfair and wrong to take away people’s fundamental rights.  Please remember to vote no on prop 8!”

Evidently he was a tourist.  A grumpy tourist.

Alrighty, then. Try not to choke on the crab down at Fisherman’s Wharf, sir. 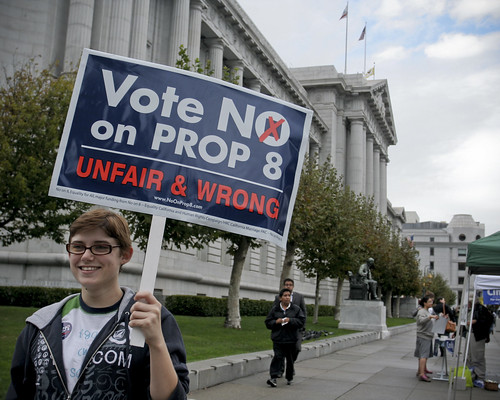 The Prop 8 Spread the Word to your friends form

The Los Angeles Times editorial: No on Proposition 8

[next in this marraige equality series: Article of faith]

Yer daily dose of Kate: From the Courthouse

8 thoughts on “Prop 8 update the gazillionth: the day before”