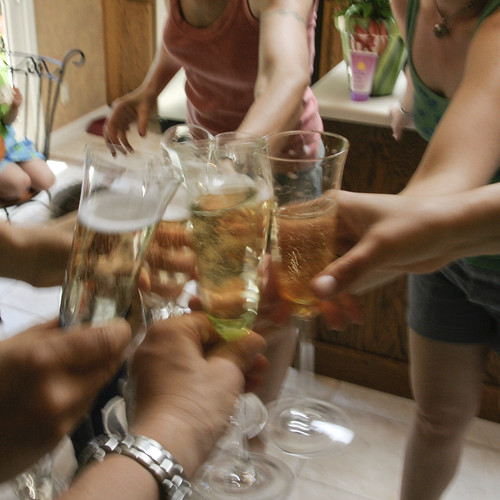 Youbetcha, the moment the California Supreme Court handed down its decision to uphold the constitutionality of same-sex marriages, on the basis of the equal protection clause in the constitution, the battle to defend it began. (For more, see Christopher Lisotta’s piece in The Nation; likewise The Bilerico Project’s Karen Ocamb’s round-up last Thursday, for which I owe a hat tip to Dana at Mombian. Wikipedia’s page on the case is already updated on the matter.)

Still, we had to celebrate. After all, we’re all proud members of Our Family Coalition, on whose behalf the case was argued, alongside fifteen couples and Equality California.

I know I’ll get queasy this summer and fall, being bombarded with the [oops!] anti gay-marriage ads and arguments, reliving the bile and bigotry of eight years ago, only now with two of my own children listening in. And it’ll be a nail biter all the way up to November 4th.

I was talking with a staffer at Our Family last week, sussing out her take on the proposition’s prospects this fall. She was talking about how the whole thing will come down to a get out the vote effort, and usually the right wing has proven to be very motivated on this issue. (Huh? Catastrophic war a motivator? Staggering economy? Relation between the two? Might any of this be a motivator?) I would like to think that if they read any of these LGBT parent blogs, they’d have a hard time forgetting the images of obviously loving families they see writ all over them, and they’d keep flashing on their own kids, maybe, when they tried to justify why our families’ legal and fiscal instability should be inshrined in the state’s constitution. I’d like to think that.

But then Yensing uttered two phrases that made me feel just a tad better about the battle royal we’re facing: (1) presidential election year, and (2) Barack Obama candidacy. Who pulls in a ton of younger voters, a cohort notoriously pro-marriage equality and pro-LGBT civil rights? Obama. Who pulls in forward-thinking, open hearted ones of all ages? Obama. Whose campaign rhetoric is all about overcoming the divisive politics of the past? Obama. Whose candidacy is going to get more folks’ asses to the voting booth this fall than we’ve seen in a long time? Obama.

So. Obama, plus we are going to fight this one like hell. Start now by supporting Equality For All’s campaign against the anti-marriage equality initiative. This is predicted to be the most expensive LGBT civil rights battle the state has ever seen, and we’re going to need help.

[I know this was totally a post, not a maxi-caption. Even in my book. Just couldn’t help it.]

[Later note: addenda in the comments. What can I say. It’s a Big Issue.]