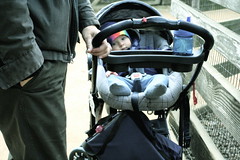 After letting loose a weekâ€™s worth of spit-polished essay (the better to pass our time as I nursed my surgery wounds), I am a tad sheepish. I give your average blog post a whole lot less rehearsal time, shoving it in front of the footlights, wig akimbo and costume unbuttoned, with only a fraction of its lines committed to memory. Poor thing.

But I suppose thatâ€™s a bit of what a blog is: an open rehearsal. A notebook, a sketch pad, a drafting board. Particularly if it is done in the off hours, as this one is. The leg a blog has up over print media — and itâ€™s substantial — is that it thrives on, is even substantiated by, dialog. Which is well worth the embarrassment of flashing a bit of writerly plumberâ€™s butt on a regular basis.

Re-reading my Confessions essay, Iâ€™m reminded of the welter of unanswered questions that defined the beginning of my parenthood. What shall I be called? How shall I prove to others, if not my child, or myself, that I am an authentic parent? Just what is an authentic parent, anyway? And on and on, ad infinitum. I’m so very glad to report that, three or so years into the journey, plenty of my early questions have been answered by the quiet, insistent truth that I am on the job every day. It’s not so hard to define Baba: it’s a parent, which is me.

I have found parenting in general to be â€“ surprise! — much, much more deeply rewarding than I could ever have imagined, and far more deeply trying, too (infants and toddlers and menopause â€“ o my!). You know how members of your own family are able to find and stand on your various â€œbuttons,â€ the idiosyncratic things that irritate or torture the bejeezus out of you? Well, guess what? Your own kids are going to be members of your family! Who knew?! Your daily intimacy with them, coupled with the wide spectrum of the emotional and physical needs it’s your work to meet, will inevitably push past whatever curtains youâ€™d like to have installed in front your lesser self. Before you know it, you’ll see both the noblest and the crummiest parts of you pressed into service. Sigh.

But then all sorts of wonderful, sappy clichÃ© things are true, like you do feel your heart grow bigger as you watch your child sleeping; you indeed canâ€™t keep yourself from babbling on about their most infinitesimal accomplishments as if they were of equal national import as, say, the outcome of Super Tuesday primaries in a presidential election year.

More unexpected — but even more welcome — has been the realization that parenthood has connected me to people all over the world with whom I previously felt little connection. For instance: just the other day, my son staggered a moment and fell down. Watching him, my mind ran through a series of images in rapid succession. First I flashed on an image of an actor pretending to be shot; then real people being shot; then a young man being shot in Iraq (in this case, an American soldier, whose parents back home are politically conservative, say, and hear weekly in their church that folks like me are due something between pity and scorn, but certainly not equal rights or respect); then I flashed on that young manâ€™s mother in shock and grief upon learning of his death.

At the end of that seconds-long staccato barrage — initiated by nothing more dramatic than my one-year-oldâ€™s trial and error as he learns to walk — I recognized an avenue of connection that I never had before. Because I now have a son, I can now begin to imagine what it would feel like to lose him to violence, something that happens over and over again in the world, every day. A maudlin series of thoughts, maybe, but there they were. Fortunately, I am connected as much in joy as in sorrow: the thrill of watching a babyâ€™s first steps is felt by loving people the world â€˜round. The sense of triumphant beginning renews us all, regardless of what soil those steps are taken on. 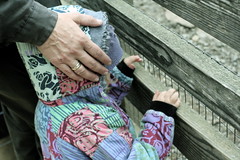 Anecdotally, Iâ€™ve found that two-mom families are not so utterly uncommon or unusual now. Most people we encounter have some previous point of reference to help guide them. Granted, we choose to live where thereâ€™s a lot of us — and at no small cost, most folks in the Bay Area will hasten to tell you — so we probably experience less surprise (at best) and hostility (at worst) than we could. Public discomfort with our non-normativeness, at least to the point that weâ€™d pick up on it in our daily peregrinations, has been modest.

What we find more often is a vast ignorance about the extent of family diversity in American life today, and a language with which to talk about it. It is all-pervasive, the presumption of a heterosexual, married, non-blended, non-adopted family as norm. Despite the fact that as of the last census, it slipped from the majority family formation, to be eclipsed by the amalgam of all of the rest of us adoptive, blended, single parent-headed, same-sex parent-headed families. Perhaps this perception will change over time. But the myth of the nuclear norm is powerful.

Given that pervasiveness, we find ourselves having to nudge out space to fit. Printed forms for things — preschool applications, doctorsâ€™ or dentistsâ€™ office intake forms, you name it — almost always provide spaces for â€œMotherâ€ and â€œFatherâ€ rather than â€œParent.â€ â€œParentâ€ appears as a referent, but far more rarely. I certainly want to help that to change, since thatâ€™s the best, maybe the only accurate description of who I am to my kids.

I’ve made some pleasant realizations (imperceptible, before, for the fog of worries hanging over me). I hadnâ€™t anticipated, way back before my daughter began to emerge, that Iâ€™d be able to simply talk directly to her about most of the matters that had earlier stumped me. I just plain tell her people wonâ€™t know me as a Baba, that Babas are rare and not everyone can see them. Like fairies. So far as I can tell, this makes perfect sense to her. It reflects and explains her experience. I simply ask her whether sheâ€™d like me to correct people when they call me her â€œmother.â€ (Her answer: â€œYes.â€) When weâ€™re reading and we encounter a beardless Dad, I simply say, â€œIt says â€˜Dadâ€™ here, but Iâ€™d like to change it and make it a Baba. Is that okay?â€ (Her answer, so far: â€œYes.â€) Every so often I re-iterate why: “There’s not a lot of books and stories that have Mamas and Babas in them, so I like to write us into this one.” This is normal for her, to take liberties with a story, and bend it to make it begin to speak to her own family. Thatâ€™s a skill sheâ€™ll be using more and more throughout her life, and weâ€™re teaching it to her as casually and as diligently as we teach her how to brush her teeth. It feels about as important.

But for every early parental question that has been resolved, other questions have cropped up to take their place. Two that spring to mind: as she moves ever outward into the world, how will our daughter begin to field more and more people’s ignorance about our family structure? How can we protect and inform her at the same time, quietly slipping the right tools into her pockets? And now that we’ve been blessed with a son, I wonder: at what age will he begin to see I’m a she-Baba, a lesbian dad, not an ordinary one? And will he long for what he doesn’t have?

Ah, but the real question is: What kind of adventure would all this be if I knew what was going to happen next, or what the hell I was going to do about it before it happened?