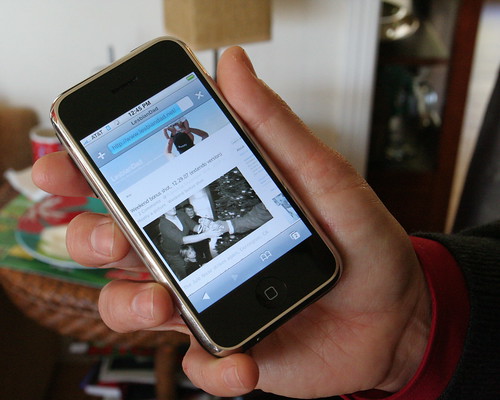 Pictured above: a media tongue-twister. A photograph, displayed on a blog, of a media playback device displaying a photograph, which appeared on a blog. Which photograph, by the way, only exists digitally. Unless and until I (or anyone else, for that matter) downloads and prints it. The moment it “captures” came and went in a blink, but I suspect that it remains in my daughter’s head still. Hopefully, some of the value of the image lies in the universality of that moment. Though it was conveyed by a specific for instance.

Now what does any of this palimpsest of representation mean? Nuttin’ in particular. Necessarily. But the “internet in your pocket” device featured in that media tongue-twister above does get me to pondering: is meaning (its depth, its value, its integrity, etc.) affected by the E-Z accessibility of its age-old conveyances (images and words, i.e.)? Per usual, I’m of two minds: part of me thinks no, part of me thinks yes.

Back in grad school, a friend of mine used to argue that obtuse, dense-as-a bad-fruitcake theoretical prose was dense like that for a reason: you were supposed to exert effort to extract the meaning from it, and the exertion itself was in fact part of the meaning. Using this reasoning, a hunk of gold you have to sweat over as you hack away at a mountain to find it would have more value than the hunk you trip over whilst traipsing along the edge of a stream bed.

(I’d probably prefer to trip over a hunk of gold, but then again I’d also have a much greater sense of ownership, even righteous justification, after sweating and hacking my way to the hunk in a gold mine. In the same way that I quite enjoy chopping wood, whenever there’s any to be chopped, for a fire. Maybe really I’m a workhorse trapped in a procrastinator’s body.)

A related — and to my mind, equally difficult to resolve conundrum — is: do we value what we have to “pay” for more than that which we get for free? Everyone who’s in a position to set their own hourly rate as a freelancer or self-employed person is aware of the truism that people affix a value to your work relative to what they have to pay for it. So if you undercharge for your labor, it will be valued less. And if you charge top dollar, your work will be more highly prized. Or so goes this line of reasoning.

Of course it works in reverse, too. Remember the second chapter of Twain’s The Adventures of Tom Sawyer? (Peep it for yourself here, thanks to Wikisource.) This is the infamous chapter in which Tom hoodwinks other boys into doing his fence-painting chore by promoting it as a rare treasure, available to a select few:

He had discovered a great law of human action, without knowing it — namely, that in order to make a man or a boy covet a thing, it is only necessary to make the thing difficult to attain. If he had been a great and wise philosopher, like the writer of this book, he would now have comprehended that Work consists of whatever a body is obliged to do, and that Play consists of whatever a body is not obliged to do.

So now, I leave us all with a question: do you value what you read/consume on the internet more when you have to pay for it, either via subscription, or via tolerating the familiar background noise of advertisements? And a related one: what if you could get what you got for free, but had the option to throw a coupla coins into a cup? Would you? (Hint: If you think this question smacks of foreshadowing, you’re right!)

If you build it, they will come

18 thoughts on “Pomo hi-jinx and an econ riddle”