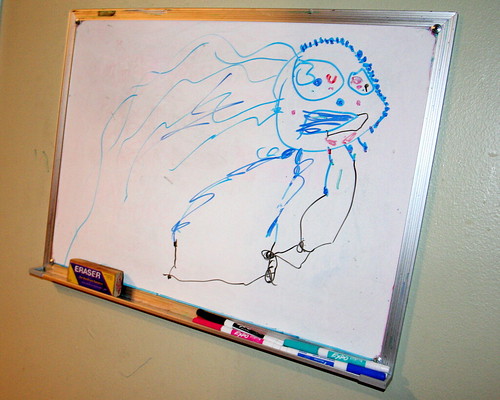 Recent illustration of goddess knows what, hopefully not Baba, by the lil’ monkey.

Baba’s mood is…skittish. Or maybe brooding. Yeah, that’s it. Brooding in a kind of a skittish sort of a way. Later today I’m to have minor surgery (I check into the “In N’ Out” floor of the hospital), during which various longstanding and nettlesome matters relating to my female reproductive organs and surrounding innards will be attended to and researched further. Ordinarily I’d be reluctant to even mention this medical broo-ha-ha, being dedicated as I am both to the benign neglect of these self-same organs and to the downplaying of medical broo-ha-ha as it relates to my person. But I’ll be out of comission for a bit and wanted to set up the Alternative Fare I’ll be posting here whilst I recoup my joie de vivre.

I thought that for the next week while I’m out, I would post, bit-by-bit, an essay of mine which appeared in the storied volume Confessions of the Other Mother: Non-Biological Lesbian Moms Tell All (thanks again to the incomparable Harlyn Aizley, who’s now opened up her own blogging shop, for making that anthology both possible and fantastic). You just might have noticed reference to the book over in the sidebar of the blog’s homepage. Just maybe.

In the essay I have there, “Confessions of a Lesbian Dad,” I introduce to a breathlessly waiting world the memorable term “lesbian dad,” and chart my movement from worried, pre-inseminatory, would-be non-bio parent, to freshly annointed (but as-yet clueless) lesbian dad. I wrote the whole of it before I began this blog, so it consititutes the official back story to what I’ve recorded here. And since I wrote it back then, I also wrote it before I began to answer some of the questions I pose in it. I had a hunch how I would want to try to position myself, parentally speaking, but I had no idea whether it would all work out. For any of you folks reading this who are in the plotting and worrying phase of your parenthood — particularly if you’re a gal who’s going to be parenting alongside a sweetie who’ll be all pregnant and birthing and radiating with Authentic Biological Motherhood — it might be nice to compare the tone and content of that essay then (dating three years old this spring) with this blog now.

From time to time, I think that some of the things I wrote there would help explain or extend various conversations here, so in addition to keeping things lively and filled with content! content! content! here while I recoup, I can also have something to refer back to in the future. I apologize for the redundancy to those of you who’ve already read the piece. I also wince at the stark contrast that will emerge between the well-thought out, properly ironed prose that one prepares for print, and the tossled, mussed, just-rolled-out-of-bed kind of prose which one tosses up into the digital ether day after day, with reckless disregard for typos or half-baked thoughts, simply because there’s such a built-in informality to an essay when it appears in the medium of blog. Or so one seems to think.

(So far as I understand, we authors didn’t lose copyright on the material when our essays were published — right, Robin? — so it’s not an infringement on that upstanding press, Beacon, if I reprint the stuff here. If it is, I will totally )

If I’m feeling perky enough, I’ll chit-chat back in comments. Otherwise, I’ll simply try to talk my daughter / beloved / long-suffering childcare S.W.A.T. team friends through the process of moderating comments from my prone position on the bed / couch / floor / wherever I may find myself.

As a wee public service