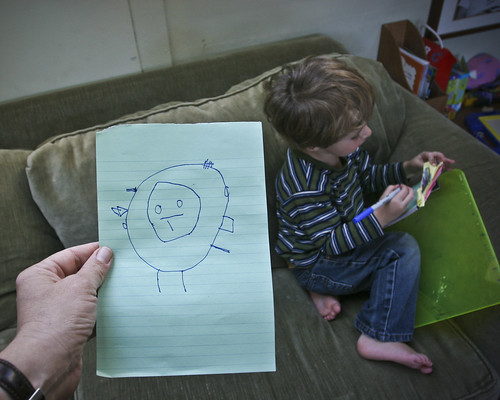 I could have also entitled this “Baba’s mood is…” since the image captures that pretty nicely, too. Okay it’s a bit understated. It’s more like this other picture, by his sister. Â But I don’t want to impose my interpretive vision on that of the artist.

He was having a perfectly fine time with the paper, but of course eventually he ran out of it (either the paper itself or the fine time with it, who can say) at a point in the day when I was all tangled up in the dreary, inexplicable travails of adulthood. Â Well, they’re explicable to us, but to them? Nope. Our grown-up stresses remain as distant and confusing to them as the global economy will always remain to me. Â And as relevant. Â Meaning, plenty.

Either way, as per usual, as per the wall-to-wall stress that painted the insides of our home throughout the Prop 8 battle last year, all he sees is its impact on me, never its source. Â For good reason, but still. Â I’m Faust, muttering to a Mephistopheles that he’ll never see.

So what did he do? Â He did what any self-respecting 2.75 year old would do. Â After multiple times trying to get my attention (was I on the phone? hunched over the computer? pacing the room in a reverie of self-importance?), after the umpity-umpth unanswered “Babaaaaaaaaaaaaaaaaaaa,”Â he made a nice facsimile of this image. On the arm of the couch. In permanent marker. For posterity.

Every time I peep that little image I hope I take in a deep breath, say “There, there” to myself and everyone around me, and thank the little guy.