Last night at dinner, we parked the lil’ peanut in one of those table-side baby seats — the kind that people bring to clip into the sides of the tables at restaurants. In our humble digs, itâ€™s a space-saving concession to a big high-chair. And though I was concerned at first that heâ€™d be too young to hold himself upright in it, lo, he did. He was riveted. And the thrill on the part of his older sister was unexpected. â€œHeâ€™s eating with us!â€ she exclaimed, even though heâ€™s been doing that since jump. Itâ€™s just that heâ€™s been doing so on the lap of one or another of us. His own chair somehow bestowed upon him mealtime bona fides, and as we held hands around the table to sing our pre-meal song, it felt like weâ€™d arrived at a whole new familial plateau.

The times, they just keep on a-changing.

When I was a young pup fresh out of college, a friend of mine conveyed what has become a durable thumbnail sketch of karma at work: we each have some lesson or another to learn while weâ€™re here. Over and over and over again, same damn lesson. We are forever encountering circumstances in which we might re-learn that lesson. With any good fortune â€“ with signs that we are actually progressing, rather than regressing or stalling in the process of becoming more awake â€“ the lesson appears in ever more sophisticated garb, the better to lure us into learning it yet again.

I have a bunch of lessons to learn properly this time around, I have no doubt. But Iâ€™m pretty sure one of them is: This too shall pass. No really, it will. Whatever it is. 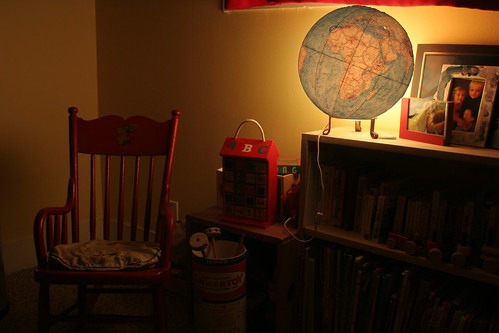 Parenthood ought to pretty much correct the misunderstanding that fixity is any part of the world we live in. As soon as you think you have some little idiosyncrasy of your kid figured out, s/he up and changes on you. And fast. Every parent of an older child on the verge of leaving home â€“ to a woman, to a man â€“ will say to those of us whose kiddles are little: they grow up in the blink of an eye. Theyâ€™ll look at us with the toddler in tow, and say something along the lines of, â€œBefore you know it, sheâ€™ll be hugging you good-bye on her way to college.â€ Theyâ€™ll look sweetly at your infant and say: â€œIt was just yesterday.â€

Just yesterday our son hadnâ€™t been born yet, and we were worrying that our daughter would feel the inevitable diminishment of our attention like a sharp wound. I remember the look she gave me when she first stumbled upon me loving on her brother at home. â€œCrestfallenâ€ doesnâ€™t really quite capture the pathos. Though â€œbetrayedâ€ may be a bit too harsh. But only a bit. I also remember the peaks and valleys she experienced.

Back then (oh all of six months ago), Iâ€™m not sure I would have been able to anticipate the depth of the love sheâ€™d develop for her brother. And even if I would have hoped they would quickly become vital to one another, I would have still projected strife over such things as, say, the encroachment of the little brother into â€œherâ€ room. I wouldnâ€™t have been able to guess that on the first night that we put his sleeping self into the crib in her room â€“ her old crib, in a space that is gradually becoming their room â€“ she would be beside herself with enthusiasm.

â€œItâ€™s like weâ€™re having a slumber party!â€ she said, with her hands all balled up near her face and her shoulders hunched up to her ears. Weâ€™d lain him asleep in the crib, and told her heâ€™d be there with her in the first part of the night, until the first time he needed to wake up to have more milk (at which point: back to his erstwhile nighttime home between Mama and Baba.) All through our singing nightime lullabies she kept flopping back and forth on her pillow like a fish on the dock. The glee was infectious.

These days, after the beloved and I sing our lullabies, the lilâ€™ monkey asks me to climb into bed and cuddle with her. There I’m to sing â€œjust one verseâ€ of the Jane Siberry lullabies we put on for her to listen to as she falls asleep. Usually the â€œone verseâ€ spreads into â€œone songâ€ and, Iâ€™ll admit, on occasion, several more. I am acutely aware of the rarity of such moments in her life. There will be a time, and it will be upon us sooner than weâ€™ll know, that she wonâ€™t want to be tucked in like this. Woe betide me when she doesn’t even want to be tucked in at all.

As I was spooned around her last night, humming harmony to Jane, she whispered conspiratorially, â€œBabi? Youâ€”youâ€”you guys ought to have him eat at the table all the time! And sleep in my room every night !â€ After which suggestion she shudders with yet more enthusiasm. â€œThatâ€™s a wonderful idea, sweetie,â€ says I, not wanting this moment to ever, ever pass.

1 thought on “It was just yesterday”