Fridays, we both take the kids to school, rather than to the bus stop, since the school kicks off the day with a community-wide meeting. Today, after leaving school, we stopped by The Cheese Board, our venerated neighborhood collective cheese shop/bakery.

The man in line in front of us turned around at the sound of my voice, and smiled.

I might have split a hair or two about how in truth I’m more so-and-so’s parent, really; she calls me Baba; we’re naming the liminal space between the falsely dichotemized poles of mother and father, but still, I totally get the shorthand thing – who has time for Althusser before your morning coffee, you know?

Neither of us had had a sip of coffee yet, so that part stayed in my brain.

We eased forward in line, chit-chatting about the upcoming sleepover our daughter will be having with no fewer than seven (count ’em! 7!) eight- and nine-year-old girls. Girl-a-palooza. Girl-ma-geddon. Night of the Living Girls. The giddy nervousness I  feel in anticipation, even a week out, is in truth a leaky subterranean dread of all the many, many Things That Could Go Wrong. 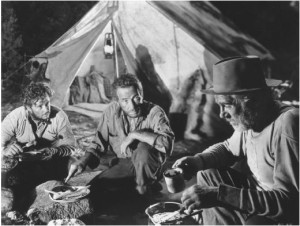 The one and only time we had a sleepover over here, it was like Treasure of Sierra Madre. Only it was my then-seven-year-old girl, and not a grizzled prospector, who was staying up into the wee hours of the morning, daring the others to fall asleep first. She won.

Keiko’s dad left with his sourdough something-or-other, and Mrs Dad and I repaired to the cream counter to doctor up our coffees.

“What was his name?” Mrs Dad asked me.

“I think his name is Keiko’s Dad.” Pause. “Which I’m sure is fine with him. What with our daughter being So-and-so, and us being So-and-so’s Mom. S.”

At which point the woman to our left, who had been doctoring her coffee, chuckled and looked up and said, “Ha! My name’s Caleb and Eli’s Mom.”

To which I replied, “And after years of sleep deprivation, we don’t even care! Saves us all the time of remembering two or three extra names. One’s easier.”

“Tell me about it,” she said, reaching for a plastic top for her coffee.

“O how the mighty have fallen.”

“You know what I wish I had? For when it all gets too much?” She had our attention. “A velcro wall. Put a little velcro vest on the kids, throw them up high enough that they can’t get down on their own.”

I pictured a bunch of ornery kids up there, arms and legs waving like so many outsize sea anemones.

“Just sit with that image a moment,” she called out over her shoulder, and she strode into the day.

12 thoughts on “At the bakery”