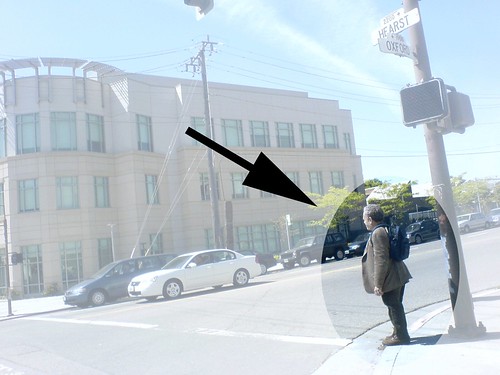 Celebrity sighting, a la Berkeley: we may not have movie stars, or captains of industry, but we do have a surfeit of Nobel Laureates and the random legendary former public servant, like the one pictured above, humbly waiting for the crossing green.

I was going to subtitle this “Reich at a crossroads,” but while that had a more literary ring to it, he doesn’t seem very conflicted by his life these days; in fact he seems quite at peace with himself. Enjoing his teaching gig at the Graduate School of Public Policy at Berkeley. Savoring the quiet on his sunny stroll either back home, or to the subway. Reveling in his privacy, far from the hurly-burly of the White House Press Room. (Okay! It’s not like I was going to shadow him to find out where he was going! Covertly photograph him: yes. Shadow him: no. Great cameraphone shot, though, don’t you think?)

I ask you: if you saw Robert Reich at an intersection on your afternoon bike ride home from work, could you possibly (a) resist the perversity of taking a picture of him with your camera phone, and (b) stop there, and not share it with someone? And why stop at “someone”? Why not, upon returning home, share it with the motley assortment of actual, virtual, quasi-anonymous and completely anonymous chums who, for whatever elusive and stupifying reasons, continue to read your blog thingie?

[By the way: wanna know what he just posted on his blog, just a few hours before this image was nabbed? Here. Yeah, whatever. So what. I never claimed I was going to do breaking news & isues commentary. You don’t see me complaining about the dearth of cute kid pictures on his blog, either.]

But if it’s really going to be Dada (and of course this isn’t; there’s thought behind anti-art and nonsense verse, just as there’s structure behind un-structure and Anarchism is not anarchy). But if this offering is really going to be perverse, then I have to include more than just a perverse picture. So with it I couple the following list of the various search strings that have brought various hapless souls to this locale (with color commentary). Because along with confusing memes and such, which I am only now beginning to comprehend, the occasional perverse search string list seems to be one of the emerging literary traditions defining the medium of the blog. (As soon as I figure out what to do with the memes I think I was recently tagged with, you’ll hear more on that score. Don’t hold your breath, though; we got two kids in diapers and precious little sleep to go on in these parts.)

Now to the top five among the top twenty search strings that sucked folks into this vortex:

â€¢ aztec warrior (singular and plural; got to think they were a little disappointed here. though I know what lured them in — here, this one)

â€¢ lesbian (okay; fine; but there’s qualifiers to that all over this site, so I think this searcher — or these ten searchers, actually — may also have been just as disappointed as the forty-nine schmucks in search of aztec warriors. here, we got not just any ole general lesbian stuff. we got fairly specific, sentimental, left-leaning, Bodhisattva-wannabe, parental lesbian stuff. oh, yeah, a sentimental left-leaning Bodhisattva-wannabe parental lesbian who’s genderqueer and has imprints of aztec warriors in her long-term memory; there we go, now it makes sense)

â€¢ monkeys throwing poop (yeah, baby! this one hauled ’em in, though they really need to amble over to my man Looky, Daddy’s shop to get more of that action. he talks about it so much it’s a category for him.)

â€¢ klimt (ah, how erudite. klimt, following monkey scat. this is what sucked in the klimt seekers. er, probably not what they were looking for. plus I’ve yet to make the case that Klimt’s Danae really does look like s/he’s got a 5 o’clock shadow, which was the whole reason for the klimt reference. just wait; one day when we have only one kid in diapers I’ll photograph the print on my wall and you’ll have to agree.)

In the remaining 15 search strings, one will find

â€¢ pregant ladies (eek! I worry, people, I worry what they were really looking for, those that added “ladies” to pregnant. move on! move on! that is sick sick sick!)

â€¢ am i ready to give birth now (oops! not like anything they found here would have been any help on that one! unless it gave them the idea: Hey! I can redundantly vacuum stuff!)

â€¢ boy skirt (eh? I love utilikilts, but they don’t make them small enough for our lil’ peanut yet) and

â€¢ farm boy (double eh? one stray reference to my father’s father’s upbringing as a farm boy on the lonesome plains of South Dakota, one time, and now it’s viable as a search string. hauled in two poor saps. hope they didn’t spend too much time scratching their heads. “Lesbian? Dad? Farming? I don’t see the connection.”).

7 thoughts on “Dada Friday: Reich at a crosswalk”