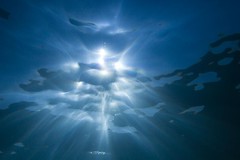 ocean 005: looking up at the sun, by lifecanvas_com_au.

Thirteen years ago on September 1, my mother died. She had broken a hip bone in April, and had spent the better part of the next six months in a convalescent hospital ostensibly trying to recuperate from it. My sister and I lived far from home at the timeâ€”she was in Norway, I was in Minnesotaâ€”and we visited home periodically and kept in constant touch over the phone. Our dad was with her daily, trusted the doctors caring for her, and continually Thought Good Thoughts.

I canâ€™t explain why the doctors treating her at the time did not instantly rule out a cancer metastasis: just three years before she had broken her hip, twenty-four of twenty-seven lymph nodes had been removed from under her left armpit, along with the entirety of her left breast; following this she endured months of radiation and chemotherapy. And the hip bone, it turns out, is the most common one to break for a woman her age with a metastasized cancer. We learned this, finally, from the oncology nurses, during the last week of her life. (Most of what I know about breast cancer and its metastases came from those oncology nurses, walking goddesses all, over the course of the last week of my mother’s life.)

I canâ€™t explain why the nurses and attendants at the convalescent facilityâ€”who saw her struggling and failing to find the energy to do the physical therapy, who saw her appetite dwindling, steadily, along with her will to surviveâ€”did not review her health history, find the breast cancer just a handful of years before, and insist that a metastasis be ruled out. The only explanation I have ever been able to muster for this cavalcade of medical malfeasance is that my mother was a kindly, fat, older woman who had a high tolerance for pain and a strong disinclination to fight for attention. In other words, she was easy to undervalue, easy to ignore.

I canâ€™t even explain why weâ€”my father, my sister, and I, for whom my mother was the central heavenly body around which we had all orbited for decadesâ€”didnâ€™t demand that a metastasis be ruled out. Of course on the surface of it all, we assumed that this had already been done by her doctor(s). But exacerbating that false trust was a huge gap in our knowledge about breast cancer and the courses it can run in a woman’s body. Bigger still was the hole in our imaginations where we might have been capable of envisioning a life without her. Honestly, we couldnâ€™t, so we didnâ€™t.

Back in Minneapolis in early August, I remember talking to my friends David and Susanne as I packed for a trip back home for her birthday. My sister had been home in late July, after Iâ€™d been there in June. She was beginning to be concerned about the care our mother was receiving at the convalescent hospital, and had proposed we take her home and care for her there.

I remember saying to David and Susanne, â€œI donâ€™t know why, but I feel like this is going to be her last birthday.â€ I remember crying in front of them. They comforted me, and sent me on my way with a promise to watch after my cat Emma while I was gone.

A few weeks later, when my mother had trouble finding words (she, the life-long crossword puzzler), we took her to a neurologist, suspecting a stroke. He took a CAT scan of her brain, then an MRI. Then he looked at a simple x-ray taken back in April, back at the time of her hip bone break. On that April x-ray, plain as day, evident to anyone who would look carefully, were hundreds of lacunae: tiny holes and cavities all over her bones, the unmistakable sign of the return of the cancer, now irreversible.

We discovered this at the very crest of the waterfall, as it were: less than two days later she would fully lose consciousness, less than two weeks later she would be gone. I noted the next day in my journal: â€œSunday afternoon, late, when she opened her eyes for a moment and saw me smiling down at her she smiled back. Sunday, August 22.â€ Our last earthly interchange.

Following her death, water provided the most apt imagery with which I could describe my condition. I felt that I had been plunged to the bone-chilling center of the ocean, and all was inky blue-black around me. I felt, instinctively, that there was a surface to the oceanâ€”from time to time I could make out some kind of light indicating itâ€”and I had an instinctual sense that I might gradually float upward towards it, perhaps even without the exercise of my will, perhaps simply with the passage of time. Whether or not I would ever break the surface, I couldn’t say for certain. What the world might look like, if indeed I did surface, was something I couldn’t begin to imagine. But I knew it would look very, very different.