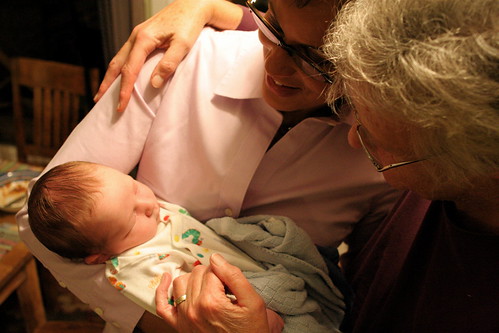 And another one strikes the dust. Visiting Auntie Rache joins her ma, who was smote a good two weeks ago at the birth.

Q: What’s almost as dear to a fresh parent’s eyes as the sight of the wee babe peacefully sleeping?

A: The sight of the wee babe peacefully sleeping while being bathed in love by smitten fambily and friends.

And smite them the sleeping babies do. It is a wonderful thing to witness, this imperative of biology. Stephen Jay Gould’s classic essay, “A Biological Homage to Mickey Mouse,” uses the evolution of Mickey Mouse (from menacing, rat-like critter to adorable cutie-pie) as a means to illustrate this elemental mamalian response to the features of a baby. Konrad Lorenz, by way of SJ Gould:

In one of his most famous articles, Konrad Lorenz argues that humans use the characteristic differences in form between babies and adults as important behavioral cues. He believes that features of juvenility trigger “”innate releasing mechanisms” for affection and nurturing in adult humans. When we see a living creature with babyish features, we feel an automatic surge of disarming tenderness. The adaptive value of this response can scarcely be questioned, for we must nurture our babies. Lorenz, by the way, lists among his releasers the very features of babyhood that Disney affixed progressively to Mickey: “a relatively large head, predominance of the brain capsule, large and low-lying eyes, bulging cheek region, short and thick extremities, a springy elastic consistency, and clumsy movements.”

Yep, that would be our peanut. Large head, predominant brain capsule, bulging cheeck region, springy elastic consistency and all.

I will now conclude this brief ditty by brazenly citing Wikipedia, even after such erudite critiques of it as have been found last year in The New Yorker and earlier this week on The Colbert Report. Herewith, their pop-synopsis of “cuteness.”

I’m no snob. No, indeed, I myself am quite heartened by the fact that Wikipedia is so porous and populist a resource: it gives me every confidence that I need wait only a few more hours before they approve and post one of my recent baby pics as a replacement for that puppy they have hogging up all that pixel space as an illustration of “cuteness.” I’ve been hitting “refresh” on that page for hours, and to no avail, but will not lose hope. I’m sure it’s just a little coding snag or something.

6 thoughts on “And even asleep hath he smote his Auntie”