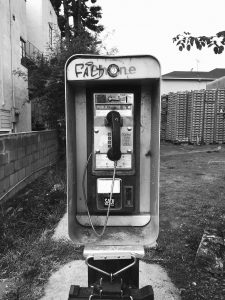 The lesbian nation may not have civil rights protections at a state or federal level; we may be grasping at essential family protections via marriage rights at a state-by-state level. In the rare cases where we do get them they’re under attack the moment they become established, and probably will be ’til the generation that’s now running around the playgrounds comes of age and runs the country. But sisters, we do have the Lesbian Double-Cross, and they can’t take that away from us.

Don’t play dumb; you know what I’m talking about. I like to call it the LDC for short: the scam pulled when the more numerically, logistically, or bureaucratically adept of the two of you calls the phone company, or the credit union, or the insurance company, ostensibly “on behalf of” the less adept of the two of you. Okay, “on behalf of” may be a little delicate. “Brazenly impersonating you” is a more accurate way to put it.

But who’s to blame us? My beloved was driven to this initially because, as an unmarried partner to me, she didn’t have access to some vital record, or decision-making capacity, or what have you. So she hung up the frickin’ phone, waited a beat, tweaked her voice, and called again “as” me. After that, the LDC became a habit. A matter of expediency. Micro-payback. They’ve driven us to it. I’m sure the brothers have the Gay Man Double-Cross, or GMDC, and who’s to blame them? I sez we’ll all stop when we get the frickin’ legal protections and access we deserve as god-fearing tax payers, and ’til then, it’s frontier justice.

Meanwhile, back in babyville. Here we are in the process of adding on the little peanut to our exceedingly exorbitant health insurance. The beloved began the process yesterday, being forced to employ the LDC to “be” me on the phone, since the health care is in my name, having originated with my job. Oh, and also since I have infinitesimal eptitude in these matters. So this morning — after we each had been awake nearly as many hours of the night that most people sleep — someone at the health insurance office called back, and she answered. The voice on the phone asked for me, and the beloved hazily said “Yes, just a moment, here she is.”

As she stretched the phone out toward me, she realized it was the health insurance people calling, and knew I would have absolutely no idea what the hell they were talking about; might even contradict random things she’d said the day before, to our certain doom. She thought fast, but not fast enough. She held the phone at arm’s length for a moment, composed herself, and returned the phone to her ear.

“Yes, this is she,” says my beloved, in a pinched, helium-high, Lily Tomlin-as-Ernestine kind of voice. At which point I double over in the kitchen and then try to remain out of sight, lest I botch the whole charade. Less than two weeks after blowing a nine-and-a-half pound child out her nether parts in under two hours at the hospital, my beloved went on to conduct the whole conversation this way. Is it any wonder I count myself lucky?

Granted, had she been less sleep-deprived, it might have occurred to her to have dropped her voice a little, which would have (a) created a better approximation of me, and (b) been vocally easier to sustain over the course of a conversation. Or she could have adopted some kind of accent, for entertainment value (Californians do have accents, even if we protest we don’t). But instead somehow she panicked and went high.

Regardless, she pulled it off, being after all a professional theater artist, and therefore in possession the requisite poise and focus. But we have each made a note to self: the LDC and sleep deprivation don’t mix. You TTC* gals and those en route to adoption out there, take note as well. As a safeguard, and to preserve the power of the LDC.

*TTC, for the uninitiated, stands for Trying To Conceive.