[Herewith, one evening in lesbian family life, as contribution to the 7th Annual Blogging for LGBT Families Day, hosted by Dana at Mombian. For musical accompaniment, might I recommend, this song of the same title as this post, from The Story‘s 1993 The Angel in the House. If you can read and listen to music at the same time, and you read none-too-fast the song should keep you company for the whole post.)

Dusk, the crepuscular hour, the gloaming. Gentle, delicious. I am cuddling with my son, now five, in the post-day, pre-sleep moments. Suspended animation. My daughter is downstairs with her Mama, listening to a dramatic, character-voiced and accented rendition of chapter seven of C.S. Lewis’ Prince Caspian.

It is balmy out for a late May Berkeley–67 degrees–and a light breeze fingers the curtains open and shut. They’re home-made, these curtains: someone we can’t remember brought a sarape to sit on during one of our family’s back yard puppet shows some years back, and left it. We put the word out, but no one claimed it, and as sometimes can happen with forgotten sarapes, our kids’ grandmother stitched bedroom curtains out of them. 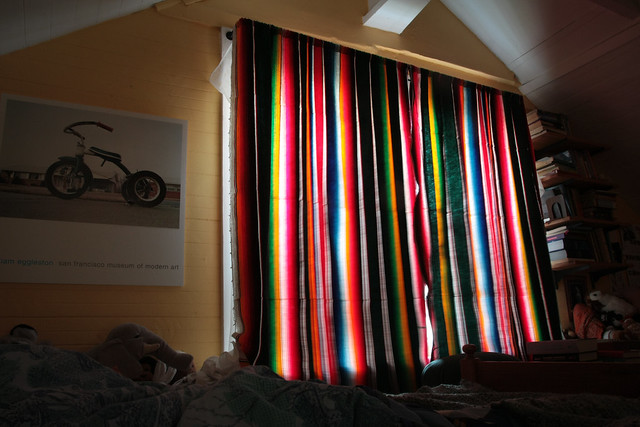 Through the open window float the sounds of folks talking as they walk up the street below; an occasional car swooshes by. A car door slams and by his voice, I hear my co-housing brother-in-law has come home; as he talks to his son, he pulls the garbage and recycling cans off the street where I had left them in my haste to make it home to dinner with the kids.

My brother-in-law and I live in houses on the same large lot in the center of the city; we share an abundant outdoor garden and play space, as well as childcare, grocery shopping, a huge complicated mortgage, and garbage can duties.  He takes the cans to the curb, I bring them back. Except that since I began working full-time, I can never bring myself to lose a minute’s evening time with my children still awake, so I usually retrieve the cans long after they’re in bed.

Tonight, as he often does, he has brought them in for me.

A small passenger plane passes overhead; robins, finches, sparrows, and California Towhees sing the sun down, fewer and fewer with each passing minute.

My son is tired tonight. He awoke much earlier than usual, because he and his sister got the idea in them the day before that they would make breakfast for Mama. Not for Mama’s day, just because. It was a Big Secret, and I conspired with them to wake them early, and to fry the egg.  When I left the house this morning at 6:20am, they were both bustling around, making toast, pouring orange juice, taping up the “Good Morning, Mama!” sign they had made the night before. Mama’s surprise breakfast was a radiant hit, I learned this evening at dinner when I saw them all again.

Before he falls asleep, I remind him that tomorrow would be the day I take him to preschool and read him a book, my wee, once-a-week gift to us both, a stake in the ground of his rapid-fleeing youth and my too-busy working parenthood. He is young enough still to be utterly unselfconscious and utterly unedited in his love for me, and he rejoices at the prospect of a book at his preschool in the morning. Behind my eyes I rejoice at his rejoicing, because if  my oldest nephew has given me nothing in his leaving this earth at just-ten, it is this very awareness: each such moment is precious, and I will not squander it.

As the breeze plays at the sarape curtain, I pull the covers up over my son’s naked shoulders; he takes my pinky into his mouth to suck on as I sing to him.  I am in no hurry to wean him of this habit, though we are taking measured steps in that direction, and “pinky” is now reserved for special morning and evening time cuddling.  I am in no hurry for the day he releases his grasp on my pinky and with it, this elemental bodily oneness we’ve shared. Though I know it will come.

I sing the lullabies as slowly and as gently as I possibly can, to elongate the moment.  One never sees anything so clearly or treasures it more exquisitely than when it’s slipping away.  As goes the day, so goes this boy’s still-wide-eyed innocence, and his uncluttered love, and my centrality to his life.

Ninety-two things about my dad

8 thoughts on “In the gloaming”