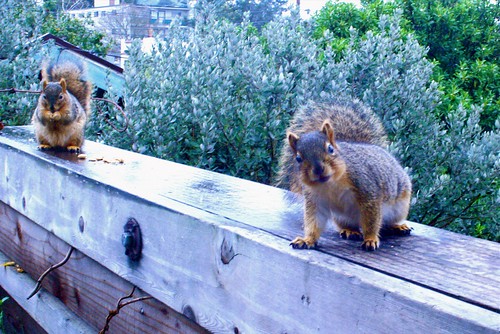 Subject at left: innocently sampling first nickel bag.
Subject at right: jonesing big time for more, and unlikely to take “No” for an answer.

Our local hospital’s ER saw many cases of bodily misery this New Year’s Eve, some perhaps even stupidly incurred. But none was more stupidly incurred, I’m quite sure, than mine: squirrel bite. Essentially self-induced squirrel bite. Worse yet, self-induced squirrel bite on a body way overdue on tetanus vaccine. On a body whose beloved is more than ready to burst with child any moment. For this reason, said body cannot afford to degenerate into the stiff-limbed, lock-jawed illness that tetanus can bring on, one to two weeks following a puncture wound from a wild rodent. One to two weeks from now I hope to be knee-deep in newborn.

It all started innocently enough, weeks and weeks ago, when I began to coax a comely local gray tree squirrel onto our porch. I’d put nuts out and the next day they’d be gone. Then after a time, in the mornings the furry little customer would scurry up onto the railing and peer in the window looking for me. I’d come out with nuts, and she’d scamper off, but return later to eat furtively. Finally, she began to simply dart a short distance away and watch me lay out the booty. I’d hustle inside and gather my daughter up to the window, and together we’d behold the sight of this little darling holding nut after nut up to her busy mouth and nibbling away. It was an urban chapter of Mutual of Omaha’s Wild Kingdom, and I was Marlin Perkins and Saint Francis of Assisi all rolled up into one.

Then the squirrel started to get cheeky.

Did I hear the warning sirens? Did I heed the writing on the wall? No, I did not. I thought, proudly, that I was demonstrating for our wee bairn the value of dogged determination. In an attention-deficited, rapid rewards-obsessed world, I was showing her the richness awaiting those with patience. I was bridging the divide between we the domesticated and they the wild, illustrating the value of the long view.

The squirrel had the long view too, and it encompassed every edible fruit and nut in our household.

By the afternoon preceding New Year’s Eve, I had managed to plow through most of our baking and cooking nut supply. The squirrel was hopping up onto the railing, scurrying up to the front door, and glaring at me. If she could have fashioned her tiny claw into a fist and pounded it I’m pretty sure she would have.

“Look, sweetie, the squirrelie!”  I said to our daughter as I rummaged through her snack supply for more nuts. Aha! Her bag of yummy toasted almonds!

Out I went, impressionable daughter following close behind. The day before, with the walnuts, I had begun to hold the nut in my hand for the squirrel to take. “Fool!”  I hear the zoologists among you cry. “Idiot!”  call out the worldly-wise. Ah, but there’s no talking sense to a Baba on a mission, and my mission was to show my girl how kindness and generosity triumph over all — including the proper, healthy boundaries between Homo sapiens and one and a half pound, sharp-fanged rodents with bushy tails.

I had been made careless by the walnuts. As anyone will tell you, a walnut is a nice, spacious nut. One can hold the edge of it and leave a wild rodent plenty of room to grab safely. Back then, the day before, the squirrel was careful and precise, still probably skittish and convincing herself that I was friend, not foe. But in the course of that afternoon she had a veritable walnut orgy; ate several Tollhouse chocolate chip cookie batches worth of them, in fact (so many she began to simply pack her mouth full and go off and bury the excess). In a short time I had moved from potential foe, to certain friend, to utter patsy.

Almonds, I discovered, are a smaller nut than walnuts, and if one is fool enough to hold it between thumb and forefinger, one will notice that once the almond is plucked up, the forefinger remaining bears a striking resemblance to another almond.

Or so the squirrel thought.

She had clamped down and was distressed to find the almond-ish looking object was attached to my hand, was indeed part and parcel of the hand itself. I had to whack the almond bag on the railing to get her to disengage. Even then all she did was hop a few feet away and watch me.

Our daughter studied my face, carefully memorizing the pronunciation and usage context of “fucker”  and “fuckin.”  Then she looked over at the smart, fat furry thing, nibbling away at the almond she did manage to score. Then she looked back at the dumb, finger-clutching, now squirrel-hating Baba.

I wagged my punctured appendage at the glib little creature. The squirrel that is, not my daughter. “You ungrateful little wretch! You, you, you future handbag you! That was no nut, that was my digit!”

One feverish online search and an advice nurse phone-chat later, I was headed for the emergency room for a tetanus shot. There I waited for five precious hours, five hours during which I’m certain I could have completed dozens upon dozens of newborn-preparatory tasks. Or provided countless foot and lower-back rubs to the obscenely pregnant beloved. Or even written on a chalkboard, hundreds of times, “I will not feed the squirrel, I will not feed the squirrel.”

Oh, I could have been stupider. I could have placed the nut in my daughter’s tiny, innocent fingers, and held them up to the squirrel. In five hours of soul-searching, while poor schmucks more wretched than I ralphed and moaned and doubled over in the ER waiting room, I managed only to conclude that:

2) There’s a reason a huge gulf separates the wild from the domesticated; and

3) You can be DAMN SURE I won’t be feeding that squirrel any time soon. Okay, or if I do, it will be on a little plate. Or maybe with

“If they know us, they don’t vote against us.”

May Day May Day!

14 thoughts on “A cautionary New Year’s tale, or Homo not so sapiens”