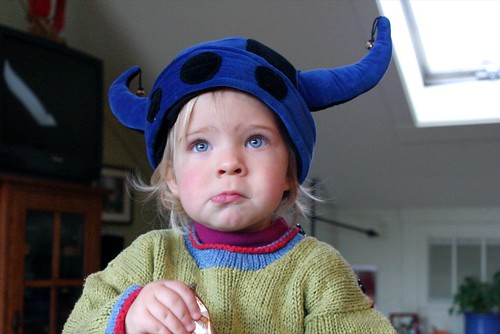 Countless benefits accrue from having an opera singer around the house. So many occasions are embellished by the recitation of a few choice operatic lines. For instance, when your kid receives a Viking hat from her Norwegian American cousins, you can cue the opera singer mum to call out a battle cry or two from Wagner’s little dittie Die Valkyrie.

[Wanna hear a vintage recording of the whole damn “Ride of the Valkyries,” courtesy The Gutenberg Project? Unfortunately this clip doesn’t include the classic “Ho jo to ho!” exclamations from BrÃ¼nhilde, et al. But it’ll get you in the mood.]

We’re already priming the little monkey for a haute culture future. The first night she ever stayed up late and watched her first lengthy stretch of television (late = past 8pm; lengthy stretch = anything over a random moment or two), was spent soaking up a fabulouslsy schmaltzy rendition of holiday classics by soprano Renee Flemming, fronting the teeming mass of the Mormon Tabernacle Choir. The lil’ monkey was transfixed, while her mum and her grampy (a voice teacher as well as an actor) spent most of the time debating about Renee’s vocal technique.

I don’t know about Miss Flemming’s vocal technique, but I do know that if she were to have worn a hat like this one during her performance, she might not have been able to resist zig-zagging back and forth across the stage, shaking her head around so’s to jingle up the bells, like the lil’ monkey did all over the house when she first parked this on her head. Might-a worried the choristers and the conductor a bit, but I bet the kids in the audience would have loved it.

2 thoughts on “Where’s a size 3T breastplate when you need one?”