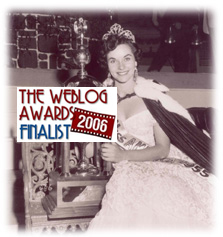 With apologies to Lee Meriweather, Miss America 1955
(whose story is here, whence I filched this image)*.

Day one of sitting back and sipping a parasol’ed, coconut milk-infused beverage on a chaise lounge, lolling in the afterglow of making it into a Weblog Awards Finalist berth for Best New Blog, and I sit up with a JOLT! and realize: it’s time to provide content! content! content! On the off chance that someone other than my dad is meandering about the internet, reviewing sites in the various Weblog Awards categories, and preparing to vote knowledgeably.

The first thought to occur to me was to be all topical, and since this is NOT a political commentary blog but simply the quotidian observations of one lesbian dad, I thought I’d post a charming picture of my lil’ monkey and me at the zoo today, where we went in search of the wily and elusive Monkey Going Poop, a vision that seared itself on her brain from her last visit, and which wakes her in the middle of the night with her sweet, filament-thin blond hair matted to her skull with sweat. Every kid is a future proctologist, a Doctor of Scatologogy; and this one is no exception. Must! See! Monkey-going-poop! And of course I’m right there with her. Two kinds of people in this world: anal retentives, and…

Then I thought that I should actually contemplate posting something of broader worth.

So my first bit of bona fide content! content! content! for new readers is going to be a helpful gesture wherein I provide links to the other wannabe Best New Blogs against which this humble assemblage of bon mots is struggling.

In the order in which they appear on the Finalists’ list:

Each of these is quite different in scale, purpose, intended audience, political affiliation, tone, content, and so forth. Some are group projects. However, none, it must be noted, feature regular pictures of my kid.

*Mraughwrrrrrrr! Ffft ffft ffft! Okay, so as a kid I had a crush on three out of three TV Catwomen (Lee Meriweather just might have been my favorite). Coincidence? Or lesbian early warning system? You be the judge.

2 thoughts on “I’m all about the magnanimity”