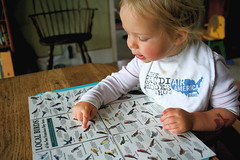 This morning the Little Monkey looked up from her bagel and saw a bird out the window on the deck railing. I said, “Look, sweetie! Do you see the birdie?” To which she replied, “Cal-a-for-nya Tow-hee.” To which I toppled over backward off my chair.

Mind you the wee mite is still shy of two years here. I knew she knew what a house finch was, and a raven. But those are two-syllable birds. Needless to say I promptly scrambled past her to the bookshelf, hauled out my handy pocket guide to local birds, and ran through the ornithological splendors waiting to reveal themselves the moment she’s capable of discerning them. As she pointed and asked about other birds (“Whassis? Whassis?”), I got to thinking about the vast taxonometric capacities she and all children have.

Somewhere between the barn owl and the great horned owl, my thoughts drifted to what at first seemed to be a paradox: she’s clearly keen to distinguish not just bird, but kind of bird, and yet I know that at the moment she doesn’t care what kind of parent I am. Right now it’s just names: Mama is Mama, and I am Baba. She hasn’t begun to parse parent into its various sub-categories. We will surely come upon the point when she will notice that others refer to me (kindly! and I appreciate it!) as her mother. At some point she’s likely correct them (“That’s not my mother, that’s my Baba.”). She’ll ask us about family relations, and learn that her cousins have a Mama and a Papa, and that’s what most people have. But some people have one mama or one papa. And some have two papas. And some, like her buddies from our parents’ group, have two mamas. In the folk taxonomy she’ll be developing, she’ll place me. Order: parent; Family: mother; Genus: lesbo mother; Species: baba, also known as lesbo father. We will likely eventually get to the point that a lot of the papas she sees on the street and in books might remind her of her Baba, and that’s because her Baba is a Baba kind of papa, too. At which point she either her brain will be twisted up into a pretzel, or it will all make intuitive sense to her. Or maybe both.

These thoughts are early, rough passes at the whole explanatory rigamarole, of course. Eventually we’ll develop simple, digestible responses to her questions, to those of other kids, to other parents, to strangers, to other caregivers, et cetera, et cetera, et cetera. Like all non-normative parents. Fortunately, all that explaining will come in due time. Just like pregnancy gives you nine months to gear up to the tectonic shift that parenthood brings, so the actual rearing of the child develops incrementally. At first, though they need an enormous amount of care and tending, the little buggers can’t even move themselves off the dang bed. They’re like turtles on their backs. Then they move around, but only bit by bit, and the flow of verbal understanding develops at a similar trickle. (Which of course has its challenges. A friend’s doctor dad told her once that pediatric medicine is more like animal husbandry: the best you can do is get them to stomp their hooves to indicate pain here or there.) Still and all, there’s a grace to the gentle pace of it all, which I, for one, appreciate.

But back to taxonomy. What may from a distance seem to be a paradox in my child’s brain (classification matters when it comes to birds, but not when it comes to parents), may actually be something else. It may simply be that, based on her keen powers of observation, our Little Monkey has a capacity to make a finer distinction than the simple dualistic construction of (A) Mother or (not-A) Father. I would posit that it’s this keen observational power that is behind kids’ tendencies to see people so honestly. Perhaps for kids, the taxonomies we adults use so constantly, so unconsciously – the better to understand the world, ostensibly – haven’t yet ossified into blinders. What a challenge to carry forth as we grow: to use a means of classifying to understand the world we see, yet be willing to discard it, or better yet enlarge it, when we encounter something for which we don’t yet have a category. What a job Darwin had.

2 thoughts on “Voyage of the Bagel”