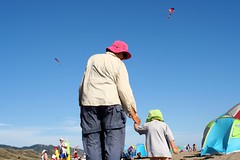 GranBaba with the Lil Monkey.
Who’s GranBaba? My kid’s blood Gramma’s butchie lesbo sweetie, who else?

I was recently asked the following:

what’s your take on half siblings? other kids from the same donor.. not a part of your family.. who are such lil ppl to you.. or to lil monkey.. where is genetics in your scheme of the world?

I tried to answer succinctly, and of course couldn’t. So here I’ll try to answer somewhere between succinctly and loquaciously, in the at least it can be read over less than a cup of coffee range.

Ah, genealogy and kinship; ah, the half-sibling question. It actualy begs the question of what one calls or considers the kids who are biologically related to one’s kids via the donor. And it’s not necessarily “half-sibling.” Or rather, this would be the term that many may use, but it certainly defaults to biological ties as the determining organizing device. My particular familial grouping, however, defines our family by the social bonds in it far more than the biological ones. It helps that my partner has two siblings, one of which is technically a half sibling (different dad), the other of which is not biologically related at all (different “biodad” and “biomum,” in other words, adopted). Never does the fractionality of her blood relation to either of these people enter into any of their language regarding one another. Nor, at the core, does it influence who they are to one another. They are brother and sisters, with love and loyalty that runs as deep as the Mariana Trench.

When I was a kid, I referred to my parents’ closest friends as “aunt” and “uncle” (Auntie June and Uncle Slim, Australians, as it happens, by birth and by emigration). As a kid, I never wondered about what bonds connected them to my parents; their loving friendship was all I needed to see. Everyone in an extended family knows what this feels like; everyone who has been raised by people other than or in addition to their blood parents knows this. Long before the “gayby boom” queer people have created “chosen family,” both by necessity and by choice. But I believe it to be by far the most ordinary of familial weaves, the extended, mixed blood- and love-connected families, and I firmly believe that my own little clump of family is simply returning to an old-school version of family, far more than it is pioneering a new one.

I am in the process of reading Stephanie Coontz’ The Way We Never Were: American Families and the Nostalgia Trap, the better to be able to substantiate this educated hunch. It’s too rich a study to try to convey in a brief synopsis here, but suffice to say that Coontz’ scholarship helps bring every hazy notion of what a “traditional” family is or was into sharp focus. And at every turn, what’s romanticized is actually more likely to be a half-forgotten television series than a lived truth.

Much larger even than these kinds of families are those emerging from shared struggle, which engenders the language of “sister” so-and-so, and “brother” so-and-so for people utterly outside what most understand to be family ties. For over twenty years, dating back to my first deep exposure to the North American Civil Rights Movement, I have identified with this means of drawing kindred spirits together into the larger human family. And as a Buddhist, I actually believe that at some point or another we’ve all been each other’s brothers, sisters, mothers, fathers, and so on, many times over. So what’s in a name, I sez. That which we call kin by any other name would smell as sweet.

And finally, a few introductory words on our connection to the person and people who’ve helped the Lil Monkey come into our lives. We know our donor: he’s the partner to one of my oldest chums. I’ve known her for over twenty five years (!), and him for over a dozen (!). Both my old chum and I wrote about the conception process, she from her vantage point as partner to donor (in its entirety here), me from mine as partner to biomum (excerpt here). The connection I have to our Donor Chum (he favors “Donor Guy,” I think because of the close cognate to “Cable Guy”) is ineffable. One day I will try to eff it. Our two families are distinct, but woven together. But I would say we’re knit together even more by choice than biology. Which is to say, we’re knit together by a great deal of mutual, voluntary love and respect. We name our kids’ relationship by what’s most accurate, socially: they are cousins, special cousins, to be exact. The kids have different parents, which is part of what distinguishes cousins from siblings. But like cousins, a blood thread connects them.

Today I went to our younger special cousins’ graduation from preschool. As she trotted in and saw me and the Lil Monkey, she whispered to her friend, “Those are my cousins.” Which, I note, included me, too. This little sweetie, a few years back, regularly alternated he and she in reference to me, in the same sentence. As in, “She wears his hair short under that baseball cap.” Both misnomers – the he/she misnomers, and the blurred familial title misnomer –are actually pretty accurate. She has the main point, which is that whoever we are, we are family.

Further food for thought: this piece by a fourteen-year-old writer, under the same title.

3 thoughts on “We are family”