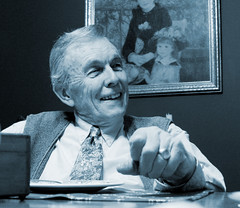 One of the most descriptive anecdotes about my Pops, per his position on my lesbianism, dates back to a bookstore visit we made in the mid-1980s. I had been out to myself for several years, but to my parents for only a short while, and they still daydreamed about it all being a phase. A lengthy phase, perhaps, but a phase nonetheless. We passed a copy of Out/Look, the now-defunct journal of queer letters. The cover caption read, â€œWhen Lesbians Sleep With Men.â€ I pointed it out to him and said, â€œLook, Pops: Iâ€™m sure youâ€™d be interested.â€ He looked at it and sighed, â€œHope springs eternal.â€

He has long since given up regarding my object choice as a phase; indeed, I tend to think now that he has too much fun with me being a lesbian to want it any other way. And, more soberly, this is part and parcel of his unconditional parental love. But even during the phase when he thought my object choice was a phase, he retained a degree of self-awareness and levity.

At 85, his good-humored optimism has never completely left him. It did, however, sustain the beating of its life during years 83 and 84. He seems to have a harder time believing himself when he repeats what I would consider to be his mantra, words he left me with every night of my childhood after he tucked me in. Night after night, as he paused at the door, he’d say, â€œRemember: itâ€™s a good world.â€ The repetition itself seemed critical to the project of making it true. But Erik’s dying knocked the wind out of himâ€”wind that he still had after one world war and two earlier cancer deaths: first his younger sister, then his wife. His grandson, finally, was too much.

Too much for all of us.

Now the words in his mantra form most often as a question. Is it a good world? All’s I can say to him is that itâ€™s a world alright, a phenomenal one; humbling, and beyond our ken.

Meanwhile he does his darndest to field the indignities of the aging process with grace and humor. Arthritic joints, crappy hearing. A highly erratic memory.

The other day he was having breakfast with J and the monkey and me at our local pseudo-New York deli. He was telling a story and had stopped mid-sentence to try to remember the right word.

â€œAsafoetida. Itâ€™s Hungarian or Bulgarian, you put it in a bag you wear around your neck. It tastes and smells awful.â€

â€œWho the hell ever heard of asafoetida?!â€ Our daughter looked up and the beloved looked askance. Iâ€™m still working on the potty mouth around the kid, and I, like all potty-mouthed parents before me, will learn my lesson when she debuts one of these choice vocabulary words in front of a witness. I am convinced it will be during the upcoming social worker visit for my second-parent adoption.

After casting about some more for le mot juste and turning up zip, he acquiesced. â€œWeâ€™ll remember the actual word later, and then weâ€™ll say, â€˜Oh.â€™ Or, we wonâ€™t.â€

At the end of the morning we parted and he headed back to his place. Per usual I was concerned about his drive home. â€œYou gonna be okay, Pops?â€

He turned around and called back, â€œâ€˜So far so good,â€™” and he paused just a moment, before continuing, “said the man as he passed the second floor, after falling out of the third.â€