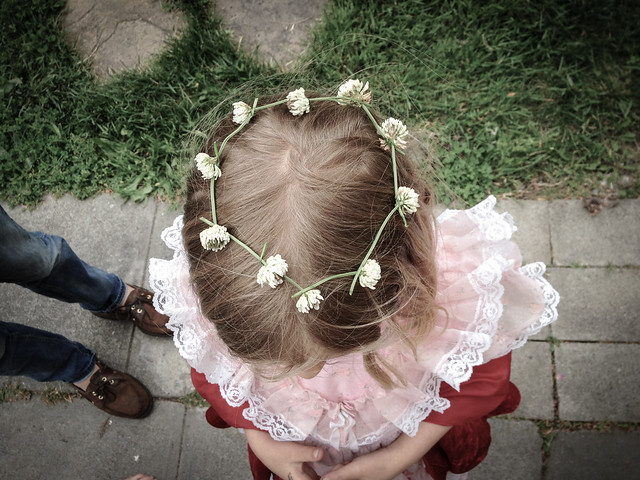 If I told you who wove this garland of flowers for my daughter, you wouldn’t believe me.

You would totally not believe me if I told you that my children are cared for a few afternoons a week by twin teenage musical theater performing braniac kids with two moms. Who once, when my children spent the day at their house, sent them back home with a custom-made “Guinness Book of World Records” filled with page after page of awards for each of them, like “Best Imitation of a Cat,” or “Biggest Jump on the Trampoline” (they have one of those enormous fantastic netted-in things), or “Loudest Raspberry Sound” (I’m making these up; I forget the details now; the point is that they derived from a day filled with insanely imaginative, attentive play).  That day, my kids went to the fairy realm and back.

Oh, and most of the time, the twins babysit as a pair. I think honestly because it’s more fun that way.

At various times in the past several years, one or the other or both of these miracle twins have taken voice lessons from my beloved, so in addition to thrilling to their performances on mama’s stage (our kids have seen them in numerous productions put on by mama’s musical theater company–Once Upon a Mattress, Anything Goes, Parade, Merrily We Roll Along, Ragtime), my children have also heard them singing and singing and singing in our house.

I mention all of this not to gloat, but to log the truth of it: my kids are growing up with this, like this. My daughter just the other day, a typical afternoon, was garlanded with loving care by a young gal who has two moms, sings soprano, and is wracking her brains right now over the decision between college in L.A. or Boston, both really great schools. Same with her brother, only it’s L.A. vs. New  York.

I’m absolutely certain that long ago, when I was fretting and worrying about what it would be like for my kids to grow up with two women as parents (you know, back when my kids were hopes and dreams, not people), I didn’t even begin to imagine something like this.

But believe me, it’s true. And I betcha these four kids aren’t the only ones.