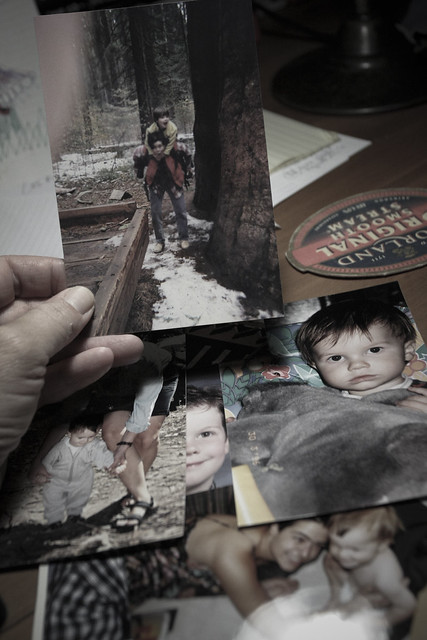 My kids are not the first ones I bathed as infants, held as they toddled, hoisted on my back for a romp through the woods.

Today would have been my oldest nephew’s seventeenth birthday. It still is his birthday. Who would he be? What would have become of all of us, had he seen seventeen? Verge of manhood. He barely reached ten; did so with more courage than many show over the course of a lifetime, or so it seemed to me.

The magic show at his tenth birthday was an experience, like so many others from that time, that I can never forget.  So much so that I approached my son’s recent fifth birthday party, at which he had asked for a magician, with no small amount of dread. This magic show came and went, buoyed along by the sound of a half a dozen small children’s laughter. No hospital bed in the family room; no ashen-faced parents of his friends, both afraid to look and too saddened and full of love to turn away. Back then, seven years ago, I positioned myself behind my nephew at the head of his bed and waited ’til the moment when he ran out of the energy to open a gift, then I gently lifted it up from his hands, so he could assay another.  Every single one of the adults in the room knew what would happen with each of those boxes (partially opened science kits, unopened Legos; the lot of them: what is anyone to do? what are they to do? these were loving offerings to this boy, and to their own children, his friends, and also to some capricious volcano god, little squirts of water in the direction of an inferno; what, really, can one do?).

I made it through my son’s recent birthday party okay. Impossible to lay the two moments side by side in the same mind, but there they both are, no choice but to try to coexist.

I won’t say that time heals all wounds, or that it even heals some. I will say that it tends to transform wound into scar tissue. Sometimes that tissue softens, sometimes it hardens. My family of origin was ultimately sundered by this cancer, or rather the calcifying scar tissue in its wake (an iceberg between the shoulder blades, as poet Mary Oliver put another moment). Others may see it differently. I’m trying to see it from the vantage point of a satellite orbiting the earth, which is about as close as I can get on this one.  Also, that’s where I see him.  The wee, faint light, gliding gracefully, nightly, watching us from just underneath the static stars.

Tonight after dinner the kids were in their pajamas, and cleaved to either side of me as they always do when we read on the couch; tight parentheses. My daughter began to delight herself by reading the picture book we’d just finished–only backwards this time, word by word, right to left, page after page. Because I was tired, with work to do after they went to bed, I was ready for it to all end after just a few such pages. But of course her brother let out fresh peals of laughter with every new page, which only redoubled her zeal to read all the way back to page one. Not many moments after had I become aware of my irritability I remembered my nephew, this being his day, after all. Looked to a picture of him on my living room mantle, felt the weight of my children’s bodies against mine, and the gratitude that they were here on either side of me, every bit as alive as I was, probably more, loving and needing me every bit as much as I loved and needed them.

gam zeh yaavor, this too shall pass

10 thoughts on “At seventeen”