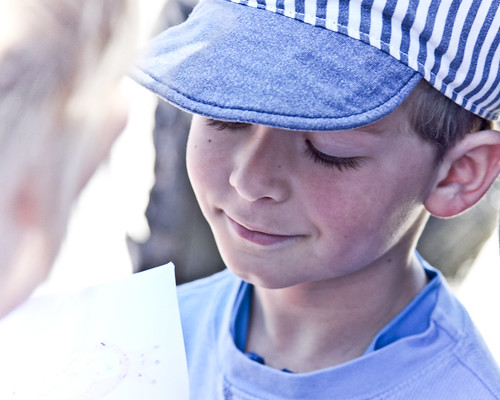 A great many Wednesdays around here have gone by wordlessly of late, so the post title is a bit misleading. Slowly (slowly! I am a 21st c. resident, on a 20th c. timeclock!) I am finding my way back here. I feel a post comin’ on soon (ok, I see a chunk of time on a plane tomorrow, some of which time I may wrestle to polish off a long half-baked explanatory note). On the other side of this upcoming weekend is a wee clear patch in the ongoing (thrill a minute!) steeplechase that is my new job. I have pencilled in “catch breath.” Hope also to ink in “write more.”

Meanwhile, me boy. Â Yes, that’s a haircut up under the cap there. He wanted it. Sigh. He can come back again to the Roger Daltry/ Robert Plant look again in his teens, I s’pose. Grandma’s looking adoringly on in the blurry left foreground. And me, behind the camera lens, catching another glimpse of him as a young man (as I try to catch my breath).