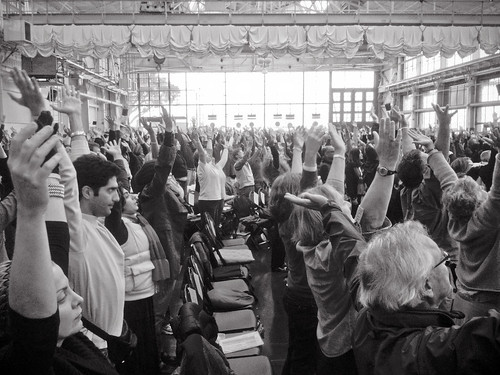 This past weekend I was not tending to others — the parental exploits that form the bulk of this blog’s subject matter — but instead tending to myself, at a nonresidential “city retreat” led by Pema ChÃ¶drÃ¶n. Â An application of ye olde “put the oxygen mask on yourself first before assisting others” truism, which truism is a reasonable shorthand for the stripes of Buddhism I’ve studied (i.e., work on opening/softening the self, the better to help open/soften others). For those unfamiliar with her, Pema ChÃ¶drÃ¶n’s an American Buddhist nun and teacher whose impact on the contemporary North American practice of Buddhism is hard to understate. At least by me who, along with countless others, has learned a very great deal from her writings and teachings.

Both she and her teachings have been aptly described as down-to-earth, practical, and disarming; she’s as compassionate about human (and animal) suffering as she is bemused by human foibles, her own included. Â To wit: throughout the weekend, during the periodic Q&A sessions, folks watching from afar would submit questions, and a few would be read by someone on site. Ani Pema (“Ani”: Tibetan honorific for a nun) would attempt to find the camera filming her and speak to it as she answered her far-away interlocutor. She turned her inability to find the camera into a kind of a running joke. Â At one point she tried and failed (yet again), at which she chuckled and said, “I feel like a complete imbecile!” Her delight was so great,Â it was as if she had just said, “I feel on top of the world!” Â That’s what it looks like to be virtually judgement free- both of self and others. We should all feel so tickled when we feel like complete (or even partial) imbeciles.

This past weekend was focussed on the topic “Smile at Fear,” and drew from the text of the same name, written by Ani Pema’s principal teacher ChÃ¶gyam Trungpa and edited by the co-leader of the weekend retreat, Carolyn Rose Gimian. Â There was far too much in both text and weekend to convey much here. I will say, with amazement, that there were 3,000 on site and another 2,000 watching via online video feed to 30-some-odd countries. That’s a whole lotta love. (During the standing yoga stretch, above, we all looked like an enormous forest of sea anemones. I couldn’t help but sneak a cameraphone picture.)

All went exceedingly well because, on top of being meticulously organized by a dedicated, largely volunteer staff, what could possibly go wrong with a Keen-wearing, Prius-driving (in carpools!), herd of 3,000 Buddhists? On their best behavior? Fisticuffs over a place in line at the port-a-potties? Tug-of-war over the last cup of hot tea? I think not!

I am tempted to dig into my notes to share a few tidbits, though. None of these were issued as bromides or directives, which they may sound like in isolation. Instead they were little jewels smuggled into our palms amidst a handful of grain, folded into some anecdote or exegesis or response to a question.

Listening to the range of stories people told when they stepped up to the microphones, it was impossible not to be reminded of the fact that suffering is universal, and is, for many, intense. A loving father of two boys with autism; a mother whose drug addict daughter ran away and is three months’ missing; a schoolteacher who has had three students commit suicide in recent years, one of whose mother took her own life in grief thereafter; a young woman who nearly drowned in a boating accident that killed her best friend. Â All these people seeking both to find greater peace and to bring more of it to others. Per usual, bearing witness to this generates the twin insights: (1) we are never alone in our suffering, to the degree that we are suffering; and (2) we have so much to be grateful for, either way. This precious human birth, Buddhists say. It’s a doozy.

Alright, so these are more than a few notes. I have a dab of childcare this afternoon and am slacking on my low-skilled home renovation tasks. Also, sneaking away and writing you this is good for my health.

One last thing: Ani Pema shared something that her teacher ChÃ¶gyam Trungpa had said at the marriage ceremony of one of his students (repeated twice, as he evidently bopped each one on the head, gently, with a closed fan, to the beat of the words):