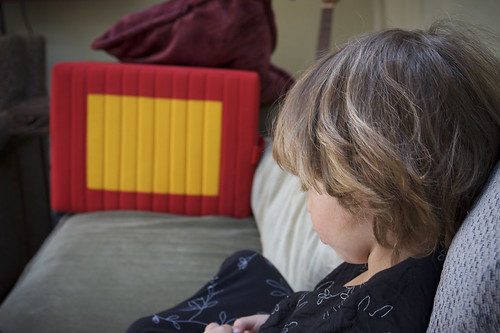 Good news: boy likes to play with my meditation cushion. Bad news: here, he set it up as “a movie” to watch.

I will invoke the fifth amendment on the topic of whether or not I, ahem, from time to time, ahem, allow him to take in the animated/visual arts. While I cook dinner and his brain turns to pudding on the couch. Â Will he meet the same sad fate as the Mike Teavee character in Roald Dahl’s Charlie and the Chocolate Factory? Only time will tell.

At least I can say that I have the 25th anniversary edition of Marie Winn’s book The Plug-In Drug, read most of it, and believe nearly every word I read. Â Soon as he can rip his attention away from the meditation cushion, I’ll read it to him, too.