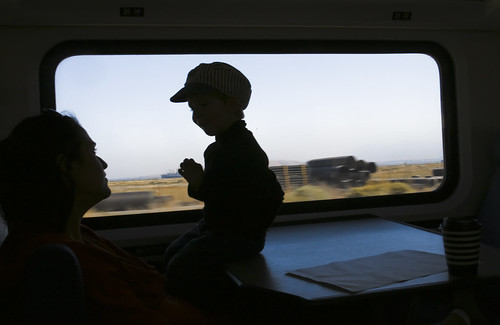 Oh, words, not even pictures can begin to capture how much we love this little person.

Here, we were en route back home after a day’s visit to Sacramento’s California State Railroad Museum. We travelled there on the day we had as a family to celebrate my forty*cough-cough*th birthday.  Why the train museum? Is Baba a train enthusiast, and has been cloaking this biographical detail from her dutiful readers lo these many years? Er, well, not so much. Not so much until like around six-to-nine months ago, when the wee peanut began to exhibit his deep affinity for (a) things mobile, and (b) trainular such things.

Have we been feeding him a narrow spectrum of gendered options? No, we have not. I submit that his favorite day would have entailed not just a trip to the train museum, but the soundtrack to Tinkerbell blasted over the passenger car’s loudspeakers as we clattered our way eastward to and westward from the city of my birth. (Really, just “Fly To Your Heart” on endless loop.) On this dream day, he would be sporting his sister’s finest chartreuse fairy tutu. I type these words with as straight a face as I have access to. Because it’s the goddess’ honest truth.

I further submit that every boy has this range in him, and I will drop to my knees and weep (mark my words) the day I realize that either end of this spectrum has been clipped off my boy by the powers that be in the culture we’re stuck in.

A deeper analysis of whence and wherefore he has come by these interesting affinities (nature? nurture? both? either? none of the above? the age-old enigma) will have to wait until we have less need for Baba to earn a buck in her rare, childcare-free moments. Which are rarer still these days, while Mama has been in tech weeks (trans: HELL WEEKS; THEATER WIDOWER WEEKS) for her fall show. It opens on Friday (a- 5-6-7-8!), and that day could not come a moment sooner than it will.

Meanwhile, in the quiet of the big sister’s school day, we while away the hours watching Lionel O-gauge train videos on YouTube, coloring in train-themed coloring books, and constructing workable track from the brother-in-law’s old wooden set.  All to the Tinkerbell soundtrack.  All aboard!