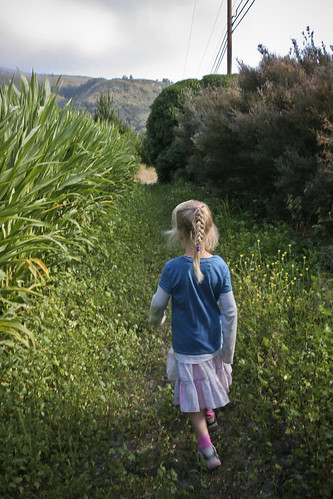 We stopped at Earthbound Farms on the way out of town. Yes, that Earthbound Farms. Unfortunate e coli outbreak notwithstanding, they have a chamomile labyrinth (shed your shoes before you tread the path and your happy feet will be thanking you for hours!), a Kid’s Garden, and a corn field maze you can (usually, but not the hour we were there) run around in. Â Good thing I have steadfastly avoided Stephen King movies, elsewise I’d have had to send the kids in unaccompanied. Had the maize maze been available.

Promptly upon return home after a week away, both kids came down with the curse that swept the beloved’s summer theater cast and her and the better part of Northern California/ the nation. Maybe H1N1-lite, maybe just a touch of influenza. But they’ve been sick in stereo, feverish, sluggish, and, when the heat of the afternoon was at its greatest, plastered to my body, looking for a way to crawl into my stomach via my belly button. Â Nights they’ve been waking the beloved hourly, last night the big one came and flopped in our bed and then commenced flopping around. As sick kids are wont to do.

Also, after this recent short break, and the BlogHer conference, and an enlightening Left Coast Writers salon chat by Scott Rosenberg (author of Say Everything: How Blogging Began, What It’s Becoming, and Why It Matters), I am pondering the ideal direction of this here blog. Maybe more of the same. Maybe less of some things. Â Close to this time last year I put my head down and did nothing (nothing!) but Prop 8-related posts. That whole shebang left a bitter bitter aftertaste I still can’t totally wash outta me, and its mark here on this blog is still visible. Â Insofar as it became too difficult to simply tell the tale of our family and my (lesbian, genderqueer) parenthood without clanging pans and grabbing lapels and running in circles calling out “Alarum! Alarum!”

Rather than stew on all this by myself, I could always ask you folks. Â Another quasi-annual Reader Survey may be in order.

Soon’s I peel these feverish kids offa my person.