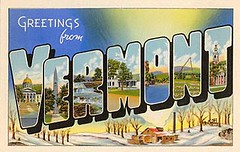 Okay, so “Hail to Vermont” is no longer the official state song. But it makes a great headline today.

The great seal of Vermont reads: Freedom & Unity, both of which got just a hair truer today when the legislature overrode the governor’s veto of marriage equality. Four states down, forty-six to go.

Herewith, a smattering of links to articles:

You have got to look at the NYT piece, not just to review the mainstream media coverage, but for the photo, also carried at the Burlington Free Press article. Â Compare these weeping, bespectacled grey-haired women to the image, promulgated by fundamentalist reaction to the vote, of a “sodomy squadron” “thumbing its nose at God.” Â (per Pam’s piece) Hmm. Â Thinking the fundamentalist reaction’s a bit off-base? Maybe?

5 thoughts on “Hail to Vermont!”