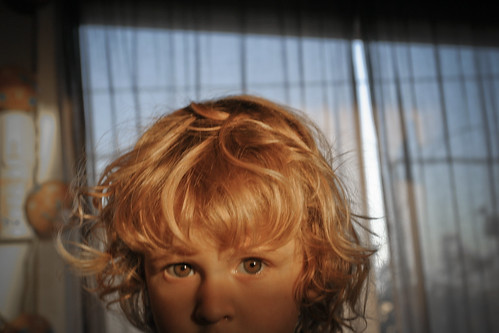 I have been noticing that I haven’t written about the boy much of late. I now know, poor neglected second child that I am, what is afoot with all that. The older one, at least at these ages, simply interacts more thoroughly, is easier to speak with. And what with adults being all partial to speech as a means of communication, well. You can see how that would put a developing speaker at a disadvantage, comparatively.

And yet. He is a breathtakingly articulate person, even now at just over two. Determinedly works his way through very long sentences. Especially when they have to do with making requests about things that should wind up “in my mouth.” Â (Did I mention he’s oral?) Â It’s just that while he’s there, uttering the Gettysburg Address, the other one is reciting The Iliad and the Odyssey, in the original Greek. Â What are you going to do?

The other older child advantages is, their “firsts” are ones that are fist for the whole family. Â First everything. Â First words, first walking, first peeing on their own, first writing, you name it. Â I totally am understanding its effect, because I am watching it unfold in our very own household. Â And both of us, the beloved and I, are not older kids in our families’ birth orders, so we’re sensitive to it all.

At the same time, I am also seeing how enormous the personality is of this little person, this youngest at the end of four kids kid (if you count in his two older cousins, who live downstairs and occupy a great deal of his play time). Â Either by happenstance, or by his own will, he is simply large. Â In presence, in impact. Â He totally cracks me up.

I would say he has a special je ne sais quois about him, but I kind of think I know quois. Â It’s a charm and a magnetism that is outside of language. Â Ineffable. Â Leastwise, it works on me. In general, the most articulate way I can put it is, he drives me crazy with love for him. Â Really, it’s visceral in a unique way. Been like that pretty much since birth (Exhibit A).

One of the very most wonderful things about our relationship is that it gives the lie to my presumptions about the primacy of the Biological Mama. Â Which the first child seemed to hammer into me, particularly in the early years (Exhibit B). Â The short version is: Not So! Â In our household, at least, the more relevant matter seems to have been: who’s been around as the primary caregiver? Â With the girlchild, in her first two years, it was Mama. Â With the boychild: Baba.

Now, it would be totally fascinating if the special closeness we have could also be traced to his feeling a greater affinity with me and my energy, gender-wise. Â But we don’t have a very well controlled experiment. Â Eclipsing all else has been the fact that I have been his bread and butter caregiver since jump. Â Mama milk? Wonderful. He still gets a little, nightimes before going to his bed, and first thing in the morning, when he joins us in ours.

But who’s little boy is he? Â Who’s pinkie finger does he come a-runnin’ to, when life gets him down? Â Mmmm hmm. Â Yeah, baby. Â Come to Baba.